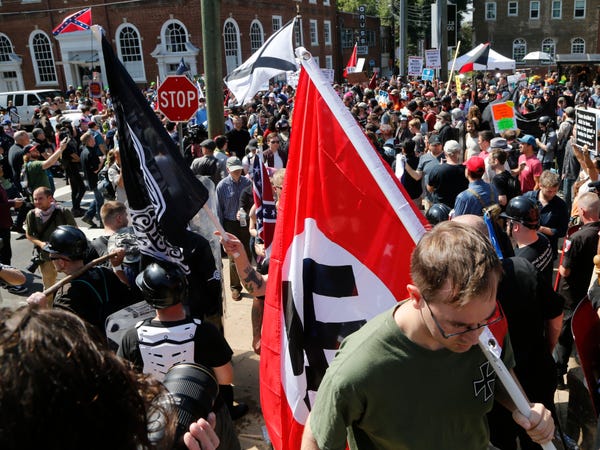 A white supremacist who has called himself the "Antifa hunter" and used social media to threaten and harass two activists while spreading racist views was sentenced to more than three years in prison on Monday.

Daniel McMahon's online harassment campaign against a Black candidate for Charlottesville, Virginia, city council, was so severe that it led the candidate, identified by the Washington Post as Don Gathers, to exit the race. He also threatened to sexually assault an anti-racism activist's young daughter, according to a Department of Justice press release. In April, McMahon pleaded guilty to charges of cyberstalking, bias-motivated intimidation, and interference with a candidate for elected office. On Monday, he was sentenced to three years and five months in prison.

McMahon, a 32-year-old from Brandon, Florida, used Gab, the social platform of choice for many members of the far right, to threaten Gathers, a leader of Charlottesville's Black Lives Matter chapter and a former candidate for city council, the Washington Post reported. McMahon called Gathers racial slurs and later told investigators that he intended for Gathers to "understand his posts as threats to his safety," the DOJ press release said.

The FBI became aware of McMahon's posts and alerted Gathers to the threats, resulting in Gathers' January 2019 announcement that he was no longer running for office, the AP said.

Investigators said that McMahon also used Facebook to cyberstalk and harass another person, identified by the AP as a North Carolina anti-racism activist. McMahon threatened the woman, who has protested against local white nationalist rallies, and her young daughter, who has autism.

In a written statement read aloud in McMahon's sentencing hearing, the North Carolina woman said, "There is seemingly nothing that Daniel McMahon will not do in the name of white supremacy."

McMahon "weaponized social media to threaten and intimidate his perceived political enemies and propagate a violent white-supremacist ideology," US Attorney Thomas T. Cullen of the Western District of Virginia said in a press release on Monday. Cullen added that McMahon's statements online "crossed the boundary" between freedom of speech and into "unlawful threats and harassment."

McMahon was arrested in September 2019 on charges that he used online threats to interfere with the Charlottesville election. The North Carolina woman later came forward with her story to federal prosecutors, the AP said.

The so-called "Antifa hunter" has been linked to Robert Bowers, the accused shooter who killed 11 congregants in October 2018 at the Tree of Life synagogue in Pittsburgh. The Southern Poverty Law Center, a non-profit organization that tracks extremism, found that Bowers frequently interacted on Gab with a man named "Jack Corbin," which was McMahon's pseudonym, investigators said.

Disdain for Antifa, or the US-based anti-fascism movement, has recently grown among the mainstream and far right, and has been exacerbated by online disinformation campaigns. In recent months, several Black Lives Matter protests around the US have been attended by counter-protesters aiming to battle members of Antifa. And earlier this summer, President Trump said that Antifa, which is not a centralized protest movement but rather a series of individual groups across the world, would be designated as a terrorist organization.