When British counter-tenor Barnaby Smith co-founded acapella ensemble Voces8 with his brother Paul in 2005, forward planning wasn't high on the ensemble's priorities. In fact, priorities of any description were few and far between.

"If I'm honest, it was a little bit of an accident that the group came into existence," Smith says. "We'd occasionally get together with some of our mates and put on the odd charity concert here and there."

They were invited to perform in a competition in Italy and thought it sounded like a nice holiday, so off they went, coming up with a name for the ensemble on the way ("voces" being Latin for "voices"). 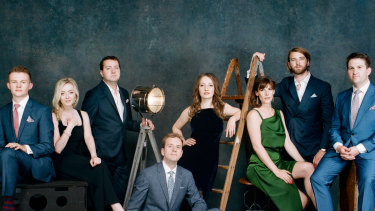 VOCES8 have become ‘accidental’ superstars of the acappella world.

"When we got there we realised that it was a much bigger deal than we had realised – we didn't feel very prepared," Smith says. But they won – and the invitations kept flowing in.

"That got me and Paul to thinking 'oh, this could actually work as a business'," he says.

Whatever ad hoc spirit may have characterised Voces8's earliest days is now a thing of the past. In the 14 years since that fateful Italian debut, the octet has continued its winning streak by taking a more calculated, responsive approach to musicmaking.

That's reflected in an the ensemble's eclectic repertoire, which traverses the choral canon from the early Renaissance to the present day, including confident forays into jazz, folk and pop.

The variety of Voces8's interests will be on full display during an upcoming Australian tour, which includes a performance of Bach's Baroque masterpiece, the B Minor Mass, alongside students from ANAM and a diverse program of music from Mendelssohn to Nat King Cole at the Sydney Opera House.

Having such an adaptable creative identity has certainly paid off. In addition to extensive international touring, including across Europe, China and the US, Voces8 has become a prolific recording ensemble with 14 albums to date, including seven under a coveted record deal with Decca Classics.

Broadly, the classical music sector has suffered amid rapid changes to the recording industry, with the CD market destabilising and digital formats becoming more dominant. But Smith sees new opportunities for groups like Voces8.

We’ve seen a huge spike in the number of people who come to our concerts because they’ve seen us on video.

"Video content is becoming a really important way for us to engage with our audience," he says.

"It's really changed our mindset from being 100 per cent focused on live music to actually considering how our digital presence can service the live concerts.

"Particularly in the last three years, we've seen a huge spike in the number of people who come to our concerts because they've seen us on video.

"At the moment, digital media creation is the crest of the wave; just as CDs were in the '80s, I think video is now the most powerful platform for classical music."

Live performance remains the cornerstone of Voces8's activity, along with a strong focus on educational outreach as a means to cultivate new audiences.

However, Smith believes that evolving to keep pace with the ways that audiences are discovering and engaging with music is vital to futureproofing the classical industry.

"I think within classical music you get two types of organisation," he says.

"There are those that think it's classical music's job to maintain tradition, so they kind of put in the tent pegs and won't move anywhere, and then there are those who see the world is moving and they try and get ahead of the curve.

"But I don't think those two positions need to be mutually exclusive, which is why we try to do a little of both."

Voces8 performs at the Sydney Opera House on June 16 as part of the Utzon Music Series; at Melbourne Recital Centre on June 21 with Susannah Lawergren, Amy Moore and the ANAM Orchestra; and at UKARIA Cultural Centre, Adelaide, June 22-23.