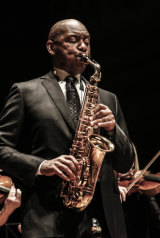 The ACO rarely indulges in titling its programs with alluding poetics. It lets its performances do the talking. Which is fair enough; it’s not for nothing that this ensemble is considered one of the nation’s best.

So, given the title of its latest outing, simply stating the top billing of its starry special guest, American saxophonist Branford Marsalis (brother of legendary jazz trumpeter Wynton Marsalis), concertgoers may have drawn the conclusion that this would be an evening celebrating the man behind the music. Those who made that assumption may have been left disappointed.

Not that there wasn't much to admire. Even by the ACO's sky-high standards, this was a dauntingly ambitious program with barely a moment that didn't demand the full technical and expressive capabilities of every musician in the ensemble.

The ACO’s displays of virtuosic brilliance seemed to outshine the intended man of the hour.

Led by Principal Violin Satu Vanska, the orchestra met its challenge head-on, to spectacular effect. Most impressively, in Ginastera's Concerto for Strings, each section leader had the chance to test their mettle against a series of wild cadenzas, before joining the combined ranks for a full-throttle thrill-ride to the final bar.

But next to these pyrotechnics, Marsalis' time on stage felt a little understated. Already prompting a slight cognitive dissonance with the choice of repertoire, which largely explored music of Latin influence – Piazzolla and Villa-Lobos in particular – rather than the jazz one might expect, the ACO's displays of virtuosic brilliance seemed to outshine the intended man of the hour.

What was undeniable, however, was this saxophonist's extraordinary capacity for emotional depth and his supple, exquisitely crafted tone, communicating with incredible detail every nuanced inflexion of feeling and intent.