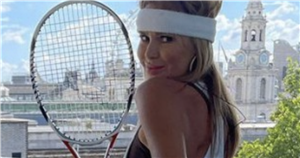 Radio hosts Amanda Holden and Ashley Roberts put on a cheeky display for their Instagram followers ahead of Wimbledon today.

Dressed in tennis whites and miniskirts, the duo recreated the iconic 70s shot which showed a woman flashing her bum at the camera to scratch her behind.

The two presenters looked over their shoulders as they lifted up their skirts revealing a glimpse of their bum cheek as they held tennis rackets in their other hand.

Posting the tennis looks on their respective Instagram accounts, Amanda captioned a video of them both saying 'Itchy bum #Wimbledon day 1'

They paid homage to the infamous 1976 pic featuring Fiona Walker that was taken by photographer Martin Elliot who was her boyfriend at the time.

It was first published as part of a calendar by retail chain Athena for the Queen's Silver Jubilee back in 1977.

One person commented: "This is epic"

Another said: "Two gorgeous beauties and a little bit of a cheeky pose."

Someone else who found the snap hilarious commented: "Omg you girls need your tv show"

Although it looks as though the 51-year-old got changed into a more chic look for the London-based tournament which she attended with her daughter Lexi.

Amanda's 16-year-old wore a lime green blazer accessorised with orange-tinted glasses as the radio host had on a white skirt and jacket with a tennis-themed handbag to match.

The mum-of-two posted an Instagram story of them both on their way to the match in a taxi as she said: "On my way to Wimbledon with this one."

The Britain's Got Talent judge revealed in March that her eldest daughter has been signed with Storm modelling agency following in her footsteps.

Although Amanda stated that it's "very much" part of Lexi's plan to finish her education first.

Speaking to The Sun, she said: "Lexi was approached last year and obviously we were waiting until she was 16 to sign anything. It's something she actually wants to do, so I'm taking the lead from her.

"She's a very quiet girl but she knows her own mind. She's very bright and wants to continue her studies.

"She's a very quiet girl but she knows her own mind. She's very bright and wants to continue her studies."