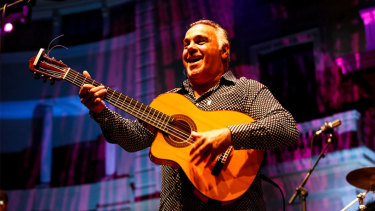 Had we come to the right place?

Dressed for dancing, many of the people milling in the foyer had bought tickets to this show on the promise of “GIPSY KINGS by Andres Reyes”, with the last three words in very small print on the ads.

But the video screens here were displaying the rather less catchy “Andre Reyes (formerly of Gipsy Kings)”.

It turns out the 51-year-old, who in 2014 left the flamenco fusionists famous for Bamboleo, hadn’t got around to clearing his use of the brand name with his elder brother. Nicolas Reyes remains lead singer of the act spawned by two families of France-based Spanish gypsies in the late 1970s.

The forced change in promotional material meant this 2500-capacity theatre was only two-thirds full. But in the end neither that, nor the fact the voice of the hits was absent, stopped the crowd from moving and hollering their appreciation throughout the two-hour set.

Andre has put together a pretty mean family band of his own, featuring three young relatives on Spanish guitar, backed with keyboard, drums, electric bass and virtuosic percussion from Brazilian Guilherme Dos Santos.

Their music sat somewhere between rumba, salsa and pop, with most of the flamenco element confined to the singing. From opener A tu Vera on, the anguished, earthy ululations of Reyes and sons never stopped packing an emotional punch.

The entire first half was strong, the likes of Gipsy Kings hits Djobi Djoba, Bem Bem Maria and Bailame intoxicating with their multiple layers of rhythm, lightning fretwork from David “Mario” Reyes, and impassioned vocals. It was also a delight to hear Andre channel Julio Iglesias on ballad Un Amor, which got the smartphone torch sway-along that seems to have become obligatory at pop concerts.

The second hour flagged somewhat, the danceable numbers suffering from a saminess in their syncopated bass lines, and guitar strumming patterns that rarely deviated from the rumba style with an open palm slap on the second and fourth beat.

The covers of My Way and Hotel California were inessential, and the same could be said of Jose “Chico” Castillo, a minor Latin pop star of the 1990s who on this night was a portly hype-man and occasional singer.

Charming at first, his cries of "Gipsy Kings!" (he mustn't have seen the legal letter) and insistence that we applaud or clap along to nearly everything became grating.

Not that this audience seemed to mind, especially once the set reached the two songs that makes "Gipsy Kings" a name worth fighting for – that explosive earworm Bamboleo, and Volare, the Italian pop staple that is the one cover the Reyes make their own.