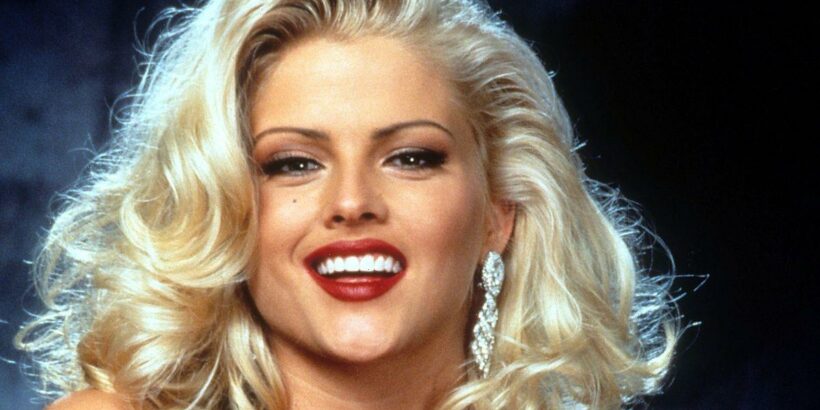 Anna Nicole Smith was hailed as Marilyn Monroe of the nineties when she first emerged in the celebrity circuit, thanks to her platinum blonde waves and Hollywood features.

A small-town girl from Texas, Anna, who changed her name when her modelling career set in motion, was born Vickie Lynn Hogan in 1967, leaving school aged just 14.

She became a teen mother following her first marriage to a cook at the fried chicken restaurant where she worked.

Their subsequent marriage, and her prolific modelling and reality television career, made her a household name of the decade.

Sadly, the low points of her life were similarly documented in the media, making the story of Anna Nicole Smith – profiled in the 2020 documentary Tragic Beauty – a tragedy in itself.

Getting to know one another at work, Anna Nicole married teenager Billy Wayne Smith in 1985, when she was 17.

The following year, she gave birth to their only son, Daniel, though little else is known of her first love.

Their marriage eventually fell apart, and Anna Nicole – who took her husband's surname – was officially divorced from Billy Wayne in 1993.

Following the death of their son Daniel in 2006, Billy and his family held a memorial service in his honour in their hometown of Mexia in Texas.

After meeting in the strip club Gigi's, J Howard Marshall was reportedly instantly smitten by Anna Nicole, who was 63 years his junior.

The club has since been demolished, getting bulldozed in 2012.

Their relationship developing over the years, Anna agreed to marry J Howard and in June 1994 they said "I do" at Houston's White Dove Wedding Chapel.

Both wore white – Anna Nicole walked down the aisle in a classic gown and veil, while J Howard donned a matching tuxedo.

Their wedding became a punchline for many, though Marshall, Anna Nicole, and her loved ones argued there was a sincere bond between the unlikely couple.

Her friend, Ray Martino, previously told ABC News: "She loved him. Really loved him so much."

The oil baron died just over one year later, and Anna got caught up in a legal battle with his family over the inheritance.

Her name wasn't mentioned in the will, though Anna claimed J Howard had promised to leave her a portion of his estate before his death.

The case went all the way to the Supreme Court, but Anna Nicole never gained any control of the billionaire's estate.

A friend suggested Anna Nicole should model for Playboy, and sent her pictures to the publication.

At the time, the magazine's photography editor, Marilyn Grabowski, praised her natural beauty, later saying: "She was the most beautiful girl I had ever seen without makeup."

Her first spread appeared in 1992, and she went on to land huge campaigns for brands like Guess Jeans, making her an internationally recognised model.

Named Playboy's Playmate of the Year in 1993, film roles followed, and she was cast in The Hudsucker Proxy and Naked Gun 33 ⅓.

After the death of J Howard, Anna Nicole went through a rough patch, and her work opportunities started to dry up.

Though her friends advised her against it, she agreed to take part in an E! reality series The Anna Nicole Show, which ran for 28 episodes.

In September 2006, Anna Nicole gave birth to her second child, daughter Dannielynn, from her previous relationship with photographer Larry Birkhead.

Her son Daniel, then aged 20, came to visit his mum and the baby in the hospital, where he died by the side of her bed.

Daniel's cause of death was determined as a drug overdose, with his passing leaving his mother utterly heartbroken.

Her partner, Howard Stern, previously told People: "Anna saw herself as both mother and father to Daniel. From the time I met her, everything was for Daniel.

"I would say that physically, she died last week, but in a lot of ways, emotionally she died when Daniel died."

Less than one year after Daniel's death, Anna Nicole was found dead in a hotel in Hollywood, Florida.

Aged just 39, the screen star died of an accidental drug overdose in February 2007, believed to be the result of combined drug intoxication.

The months leading up to her death had been challenging – she was subjected to renewed scrutiny from the media in the wake of Daniel's death.

Her funeral took place on March 2 in the Bahamas, where Anna Nicole had been living with Stern prior to her death.

In her will, Anna Nicole named her late son, Daniel, as the sole beneficiary of her estate.

Speaking on her death in court, according to Fox News, Stern said: "She talked about death really from the time I met her.

"Anna always thought in a way that she was going to die young.

Living in Kentucky with her dad, Anna Nicole is survived by her daughter Dannielynn, who is 14 years old.

The teen has been raised away from the spotlight by her father, Larry Birkhead, who shares photos of their travels together on his social media.

Enjoying a healthy and happy upbringing, Larry is devoted to keeping Anna Nicole's legacy alive for the sake of their daughter.

"I'm not the best dad, I have my faults, but I do the best I can with what the situation is,'' Birkhead told Natalie Morales on TODAY Monday in 2016.

"We make the best of it, and I think Dannielynn's best days are still to come.

"She's got such a bright future in front of her, and I try every day to keep a little bit of the memory alive of her mom."