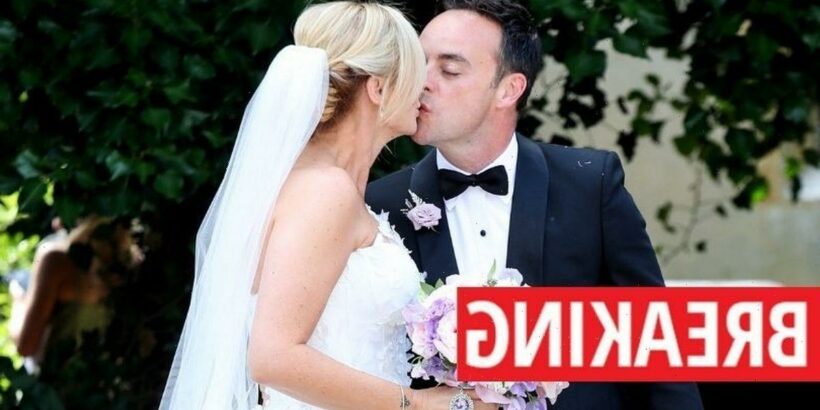 Ant McPartlin and new wife Anne-Marie Corbett have emerged from church as man and wife following their wedding.

The Geordie chap and his love tied the knot at St Michael's Church in Heckfield, in Hampshire, in front of their nearest and dearest.

Preparations began on Friday, with pictures showing workers taking huge trolleys of flowers into the venue.

Ant and Anne-Marie were wed by Rev'd Canon Dr Marion de Quidt, who told Daily Star of her excitement for the day.

"That's all I can say right now, but God bless, it's going to be a wonderful time."

The happy couple were said to be wanting a "simple and beautiful day", rather than a big fancy showbiz wedding.

They kept it classy with displays of white, pink and purple flowers around the church and in the archway entrance to the venue.

The colour scheme also played a part in the wardrobe choices for some of the key guests, such as the bridesmaids and flower girls.

Similarly, Anne-Marie's bouquet was made up of the same flowers, while Ant's button-hole was a soft purple rose.

After the wedding, Ant, Anne-Marie and their guests – including best man Declan Donnelly and pals including Stephen Mulhern and Alesha Dixon – headed to Heckfield Place for the reception.

It wasn't just Dec, Stephen and Alesha on the guest-list though, as a number of famous faces turned up to celebrate the nuptials.

Dermot O'Leary and his wife Dee Koppang were also on the guest list, as was ITV Daytime favourite Andi Peters.

However a few expected faces were no shows, with both Amanda Holden and Holly Willoughby being absent from the church.

Amanda had already explained her absence though, sharing her well-wishes on Instagram.

The BGT star wrote: "So sorry we will miss Ant's special day… we are still away.

"Sending our love and huge congratulations to Ant and Amzie on this amazing day."

The gorgeous hotel grounds where the reception is taking place are surrounded by picturesque scenes of woodlands, meadows and gardens, so it really is perfect for such a romantic event.

It's expected that around 100 people will be staying overnight at the fancy hotel, which is just a five-minute drive from the church.

According to the Mail on Sunday, Ant is paying for his guests to stay at the £1,000-a-night venue, and has even told them to charge any spa bills to his £5,000-a-night honeymoon suite.

But when you've got an estimated net worth of around £60million, what's a couple hundred thousand off the top?

Ant and Anne-Marie got engaged over Christmas and wasted no time in preparing for their big day – though they did postpone it to make sure they could celebrate with all their family and friends.

The couple got together following Ant's divorce from first wife Lisa Armstrong, after being married for 11 years.

Anne-Marie had been a friend and assistant of the couple, with her and Ant growing close during his year away from work during which he worked on personal struggles such as alcohol abuse.

Their romance has gone from strength to strength ever since, with the two of them moving into a £6million mansion in Wimbledon.

They live there with Anne-Marie's children from a previous relationship, as well as dogs Milo and Bumble.