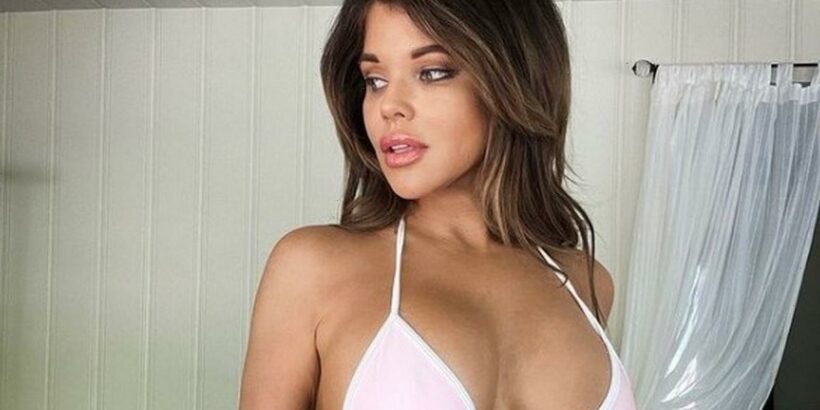 One Baywatch legend has sent her followers into overdrive as she poured her ageless curves into a barely-there bikini.

OnlyFans star Donna D’Errico looked decades younger than her 54 years as she posed up a storm surrounded by the lush greenery of her back garden in the tiny two-piece.

With triangular cups barely held together with a slim piece of string, Donna looked stunning in the shimmering gold swimwear, which left very little to the imagination.

Her incredible curves were barely contained in the tiny ensemble, and Donna’s flat tummy was bathed in stunning sunlight as she hitched her bottoms higher on her hips.

Meanwhile, her thong bottoms were tied together in a flurry of knots on her hipbone while the star let her brunette tresses fall in a sleek style past her shoulders.

Donna opted for a glam make-up look to impress her 1.1million Instagram followers, including a dusty pink lip and bold eyeliner as she gazed off into the distance.

The star said in her caption: “The LA heat wave continues. 102°!” before cheekily adding: “When I'm 80 I'm going to look back and be so happy I did this while I was hot!”

Donna truly hasn’t changed much since her days as a Baywatch icon, and she looks ageless as ever despite experiencing criticism for her racy photoshoots.

Responding to some of the trolling she’s experienced online, Donna slipped into a baby pink lingerie set and crouched on top of her living room coffee table.

She said back in July: “Quite a few women complained about the 4th of July video I posted in a red white & blue bikini because they thought I was ‘classier than that’ and ‘too old to wear a bikini”’and, my favourite, ‘desperate’. Let me tell you something that might surprise you.


“I can actually wear and do literally whatever I want. On that note, here is me in a bikini squatting on a coffee table.”

And her fans simply can’t believe how she maintains her stunning looks, as one begged: “This picture was taken in 2022?!”

“Baby you are still absolutely gorgeous!!” someone else praised, as a third fan gushed: “Looking beautiful as ever!”

“Damn, that is one sexy body,” another follower told Donna.