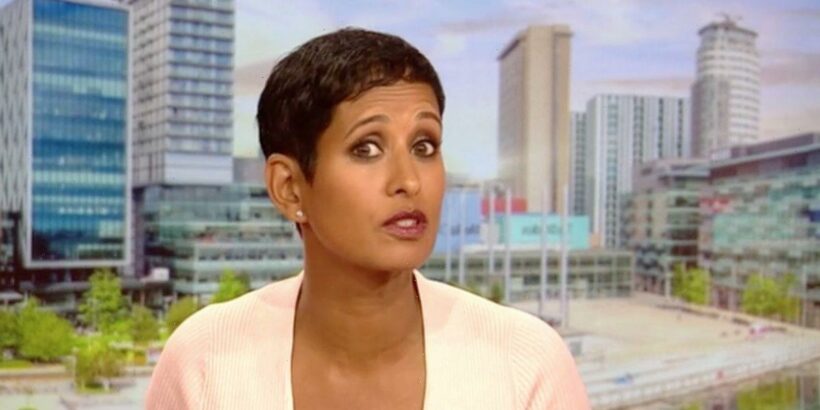 The 47-year-old shared a sweaty gym snap of herself on Sunday morning to her 52.9K to her Instagram followers.

In the caption of the image, which has received over 1,000 likes since she uploaded it, Naga went on to explain what the rest of her weekend plans were.

She revealed her Sunday would involve playing golf in the sunshine and drinking wine before going to bed ahead of hosting her radio show the next day.

The caption read: "Was determined to finish my first HIIT workout of 2022. Did it [tick emoji] Well chuffed!

"Now for [shower emoji], Then [food emoji's], To fuel for [golf and sun emoji] With [friends emoji] and [glass of wine emoji] before a little [TV emoji] and finally a good [sleep emoji] to be ready for [radio emoji] @bbc5live. Happy Sunday."

It wasn't long before her fans flocked to the comment section of the image to show their support for the star.

One person said: "So dedicated in everything you do."

Another commented: "HIIT is a killer! incredible, well done!"

Someone else said: "Congratulations Naha, you will never ever give up."

The accomplishment comes after the BBC presenter sustained a number of injuries last year which slowed down her active lifestyle.

At the end of 2021, Naga appeared on Morning Live where she spoke about some of her injuries, reports The Mirror.

She said: "I love running! [But] I've got Achilles Tendonitis and I've dislocated my knee. There's a couple of injuries."

Although her active lifestyle had to slow down at the end year, the 47-year-old unveiled another milestone in April as she was able to go on her first run since sustaining her injuries.

Naga uploaded a sweaty post-run selfie to her Instagram on April 24 to share the good news with followers.

She captioned the image: "It's been a while since I've been able to run 5k non-stop. Injuries take time to recover from. Patience isn't a virtue of mine. Feels good to get back on the road to fitness. Happy Sunday x."