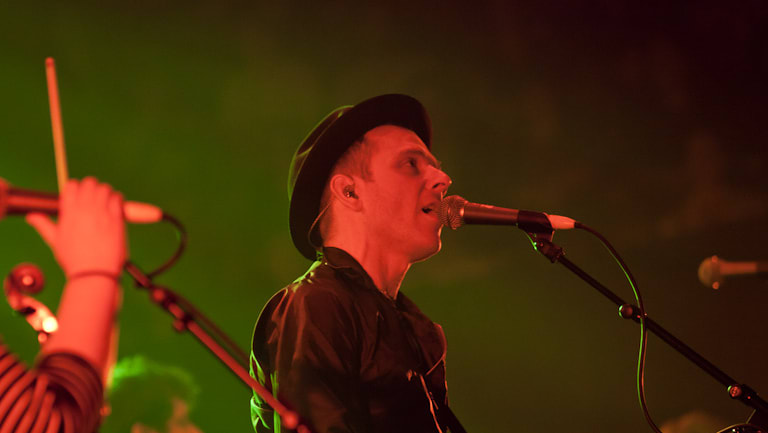 Belle and Sebastian’s recent releases have been distinctly uptempo.

MUSICBelle and Sebastian ★★★★The Palais, May 4

At some point, Belle and Sebastian decided they wanted their fans to dance, rather than just wallow, sigh and swoon.

Recent releases from the Glaswegians have featured a distinctly uptempo sound, as if frontman Stuart Murdoch and the gang realised it was time to cast off the cardigans, step out of the bedroom, and hit the town in jumpsuits.

This disco-twee brew — where synthesisers and a driving drum beat have been steeped with the band's trademark catchy lyrics and pretty melodies — was at full strength at the Palais Theatre, where an appreciative crowd were all too happy to take a sip.

A nine-piece band paraded through their extensive catalogue, from early B-sides to the most recent three-EP release, How to Solve Our Human Problems.

Sometimes it sounded like there were different bands on stage. The bouncy pop guitar riffs of I'm A Cuckoo and Another Sunny Day were interspersed with the propelling rhythm sections of newer tracks We Were Beautiful and I Want The World To Stop. And then the acoustic guitar came out for Piazza, New York Catcher.

While their harmonies were rock solid, the banter between an energetic Murdoch and other primary vocalists Stevie Jackson and Sarah Martin was as delightfully bookish as you would have expected.

The crowd, many of them older fans, particularly enjoyed anything from the band's 1996 masterpiece If You're Feeling Sinister.

For the final song, Murdoch had them singing along to one such tune, Get Me Away From Here, I'm Dying.

At the time, he was wearing an Australian flag singlet that he joked made him look "a bit like Bon Scott".

Compared to their newer material earlier in the set, it was also when they sounded the most like Belle and Sebastian.