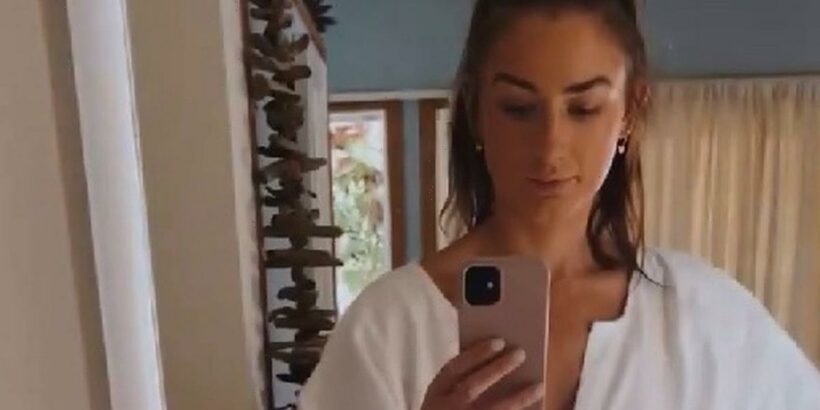 Below Deck Down Under cast member Aesha Jean has taken to Instagram to show off her tanned legs and toned figure in a pair of tiny shorts.

She shared an Instagram story of the new outfit with her 418,000 followers after she had been sent items from a clothing label.

The star was gifted a package from The Ease, a slow fashion Australian brand that focuses on sustainability.

Aesha recorded herself as she unpacked the parcel, which was wrapped in white tissue paper covered in shell illustrations.

As she ripped open the package, she revealed the clothes neatly folded on top of each other and quickly switched to a try-on clip.

The star took a selfie video in a mirror which showed her wearing a white playsuit with long, puffed sleeves, a deep v-neck and a wrap belt, accessorised with a pair of black sandals as she showed off her enviable figure.

She wrote in the caption: “Love this so much! This is the jumpsuit I had on yesterday and got so many lovely compliments on it,” and tagged the brand’s Instagram account.

In the next picture, she showed off the second outfit in the same mirror.

The Below Deck Down Under star posed with a huge grin as she showed off the matching two-piece set, which consisted of a pair of linen peach coloured shorts and a matching boxy shirt.

She added another caption over the top: “And a pink number,” with a pink heart emoji.

The producers of Below Deck Down Under have reportedly been sued for nine million dollars for causing damage to a yacht whilst filming for the series.

The show’s producers will allegedly face the fine after they were involved in a crash with a 55 foot Thalassa yacht named M/Y Kery Lee III.

The boat was owned by entrepreneur Trevor Lee and fashion designer Kery Craig-Lee.

The lawsuit will reportedly be handled privately in April and will not be made known to the public but it has been reported that the ship’s keel may have been affected.

It is not known who was manning the vehicle at the time of the collision.