Festival organisers of Wine Machine have copped criticism for the way they handled the lightning storm which hit the Hunter Valley on Saturday night, the Newcastle Herald reports.

The event formerly known as Hot Dub Wine Machine, held at Roche Estate, was forced to cancel the headline act mid-festival when the storm swept in. Thousands of attendees ran for cover as heavy rain pounded the region and a mass evacuation of the site began. 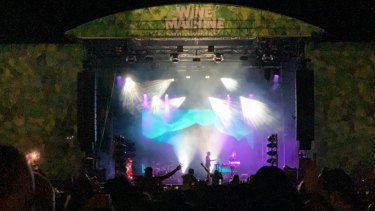 Festival-goers have taken to social media to voice outrage at the way they were abruptly made to leave, finding themselves stranded on a country road in the middle of the storm.

"Security were very aggressive, we were mushed out by horses. We were scared and seeking shelter and instead we were forced into the storm," one person wrote.

Another said "you legitimately shoved thousands of people out on to roads in the middle of an electrical storm, when Roche Estate had perfectly fine shelter that we could have used".

"So dangerous and beyond scary watching people trying to huddle down a pitch black road."

Others reported having to seek shelter in toilet cubicles and earlier issues in the day including long bar queues, poor sound quality and forced card transactions at the cashless event.

Festival organisers have since released a statement in response to the complaints.

"As those in attendance well know, the Hunter Valley last night experienced an extreme weather system that included torrential rain and a high multitude of lightning strikes within close proximity causing an initial show stop and eventual evacuation of the event.

"This sucked for every single person on site!

"The safety of all patrons, artists and staff is of absolute priority. Evacuations of this nature are never pleasant. If you have feedback on the method by which police and or security managed this please email the WM team at [email protected] and we will come back to you personally."

In response to the complaints about long bar lines, organisers blamed severe licensing conditions and staffing issues from bar operators Prime Collective which included two mini-buses carrying 32 staff not arriving at the festival due to an unnamed "incident whilst en route from Sydney".

Organisers have also promised a makeup show for headline act Hot Dub Time Machine "who is hoping to throw a complimentary make-up show for those disappointed he didn't get to play".

The Presets were the final act to play and were forced from the stage as organisers paused the event to assess the rapidly deteriorating weather situation, before the cancellation call was made.

The wild weather also forced Bryan Adams off stage at Bimbadgen during the final minutes of his performance. Cessnock was the worst-hit area during the wild weather, with the SES receiving more than 20 calls for assistance.