Elgar wrote his Serenade for Strings at age 35 yet somehow managed to sound more autumnal than Brahms, aged 52, in his last symphony, the Fourth in E minor. 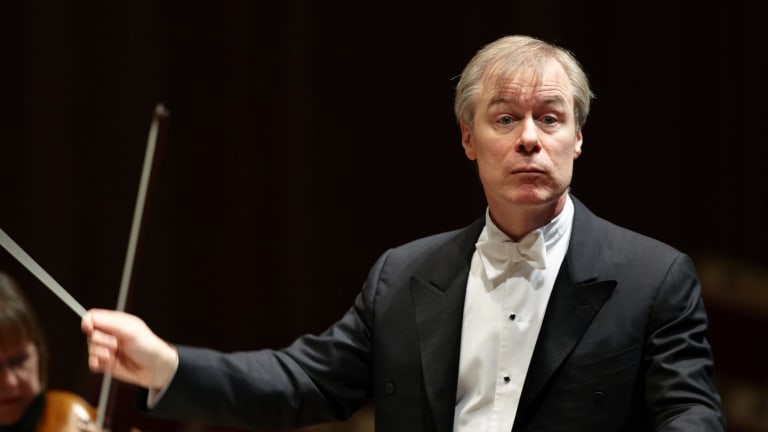 David Robertson lead the SSO in their recent program.

As the first concert in the Sydney Symphony Orchestra's Brahms mini-series hinted, perhaps it was Romanticism itself that was reaching its twilight years since these two works, though they speak to different epochs, were written only seven years apart.

David Robertson and the SSO performed the Elgar with a quiet glow of warm sensuousness, trusting to the work's understated simplicity and without false expression or any hint – heaven forbid! – of over-puffed emotionalism.

Like the best of Elgar himself, it brought out the best of Edwardian sensibility. By contrast, their performance at the end of the concert of Brahms Symphony No. 4 in E minor, Opus 98 used the same clarity of texture to highlight the work's enduring sinuous strength, particularly in the noble architecture of the first movement.

For me, that sense of a single architectural span was not quite as strong in the great passacaglia of the fourth movement though the textures for each variation had balanced tonal wholeness and finish.

In between, Alban Gerhardt gave the first Australian performance of Brett Dean's five-movement Cello Concerto, playing this complex work not only entirely from memory but with compelling focus and musical concentration that brought out the principles of the work's cogency and coherence.

It would be hard to imagine a better advocate for a new work. Many of the ideas were introduced in the first movement where they emerged as solitary thoughts like bird-calls across an open landscape, resembling inner thoughts that come to the surface and then appear to evaporate only to resurface later.

This introductory movement gives way to a broad slow movement followed by more agitated, even demonic music in the third and fourth movement (moments of which, for me, recalled both Shostakovich and Dukas!) before returning to eerie stillness for the close, ending with a graceful glide to the top of the cello and into the ether.