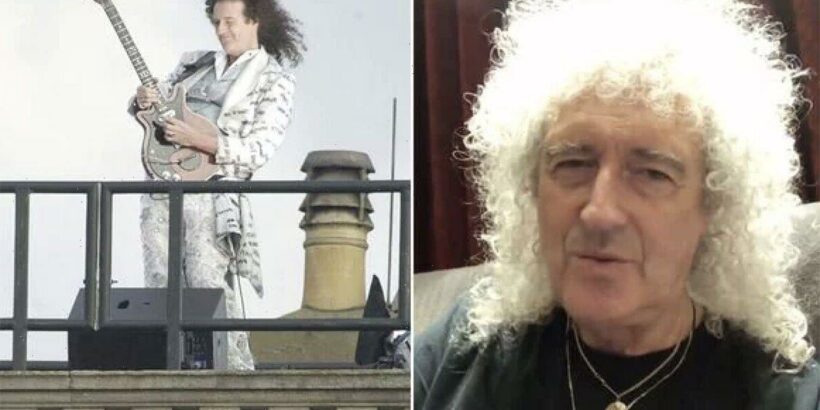 By the end of the month, Queen and Adam Lambert will finally be back on tour after a two year delay. Since Brian May, Roger Taylor and the singer will be in London anyway for their 10 day residency at The O2, we always had a sneaking suspicion they could be tempted to perform at Queen Elizabeth II’s Platinum Jubilee concert. Express.co.uk asked Brian himself last month, who played it coy but admitted that talks had been occurring.

Speaking exclusively with Express.co.uk, Brian said at the time with a cheeky giggle: “I don’t think I’m allowed to say…I suppose I can say that it has been discussed. So you may see us there…Of course, it would have to be something quite big following the appearance on the Buckingham Palace roof many years ago. I think people would expect something quite special, wouldn’t they? Hmmm…so that’s probably all we can say at the moment.”

Now the news is confirmed, with Queen and Adam Lambert set to open the BBC’s Platinum Party at the Palace concert.

Brian famously opened the Golden Jubilee show 20 years ago by performing God Save The Queen on his guitar from the rooftop of Buckingham Palace.

The 74-year-old has been asked in recent years whether he would do this again, but has always brushed it aside saying someone else should.

Yet now he’s teased that he’ll be playing somewhere slightly different around the stately home and is getting fans to guess where.

The rock legend wrote on his Instagram: “Twenty years after playing the Queen’s glorious Golden Jubilee we’re very happy to be invited again. Then there was a moment when I wondered.. after Buckingham Palace roof where can you go? Well… you will see!”

The Platinum Party at the Palace stage is set to be built in front of Buckingham Palace around the Queen Victoria monument at the end of The Mall.

Other stars due to perform at the three-stage event that will last two and half hours include Andrea Bocelli, Duran Duran and James Bond No Time To Die composer Hans Zimmer.

Meanwhile, the UK’s Eurovision runner up Sam Ryder will sing too, alongside a pre-recorded performance by Sir Elton John, who is away on tour at the time.

Additionally, Diana Ross will close the show in her first live UK performance in 15 years.

Ross said: “I have had the honour of meeting the Queen many times throughout my life, including when I was with my family. Her Majesty has and continues to be such an incredible inspiration to so many across the world and I was absolutely delighted to receive an invitation to perform on such a momentous and historic occasion.”