An eclectic wall of sound from Alaskan psychedelic rockers Portugal. The Man filled Brisbane's the Tivoli on Thursday night.

The establishment also housed a large contingent of punters who were very likely only there for one song: the nearly oversaturated Grammy-winning Feel It Still, which – along with new album Woodstock – has seen the band take a more mainstream pop direction. 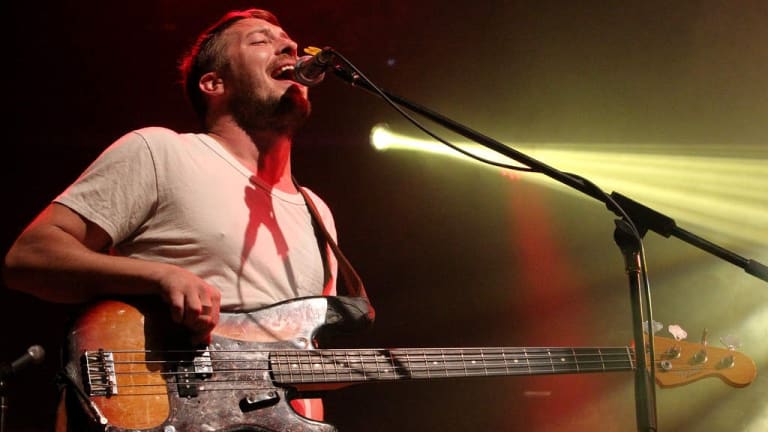 Fortunately, they treated longer-term fans to hits from earlier LPs In the Mountain in the Cloud and Evil Friends and showed no signs of fatigue at the penultimate show of their Australia-New Zealand tour.

After band recently took a stand against <em>Sunrise’s</em> controversial stolen generations segment, they have included a "welcome to country" at each of their Australian shows and Thursday’s Brisbane ceremony was delivered by Aunty Maroochy Barambah of the Turrbal people.

Then the lights dimmed before the Portugal. The Man’s wry sense of humour was exhibited in a projector message that read: “We are not very good at banter so tonight’s show will feature some slogans from our management.” 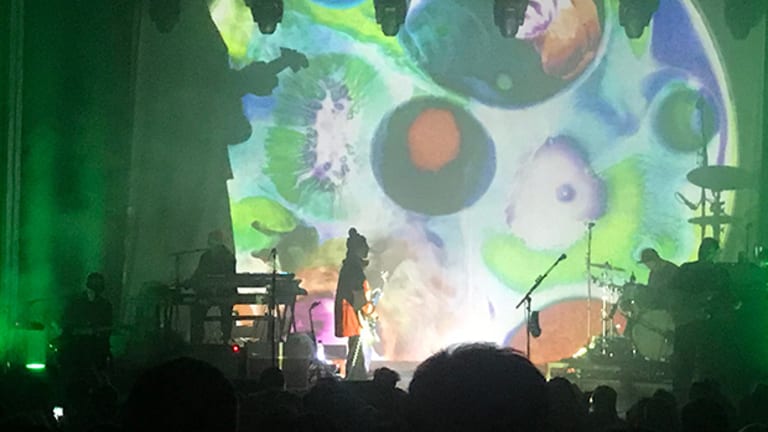 Psychedelic swirls tower over the band in their Australian tour.

A lack of rock-star yarns between songs only showcased the band’s ability to transition between tracks seamlessly, dropping the odd classic cover among a strong back catalogue.

The quintet stormed the stage with a head-banging rendition of Metallica’s For Whom the Bell Tolls that surely would have earnt a horns-up from James Hetfield himself.

This morphed into Pink Floyd’s Another Brick in the Wall (Part 2), before Purple Yellow Red and Blue got the original content rolling.

All the while, a projected kaleidoscope of bizarre imagery (bubbling blood cells, bondage dolls and laser grids) flooded the backdrop.

Then came tracks from the new album, Number One, and a rendition of Live in the Moment that was much more guitar-driven than the synth-heavy album version.

Frontman John Gourley’s ability to move between falsetto and his folksy middle register with aplomb was definitely on show.

A cover of T. Rex’s Children of the Revolution dropped in before the Evil Friends-era Atomic Man – which morphed into the Stones’ Gimme Shelter – followed by the anthemic Modern Jesus.

As All Your Light (Times Like These) soared, another tongue-in-cheek message greeted fans on the projector: “Don’t worry, we’re playing that song after this.”

And, sure enough, Feel It Still, with its catchy opening bassline, gave most of the recently converted fans what they wanted before Hey Jude closed the main bracket.

After this, bassist and backing vocalist Zach Carothers thanked the Brisbane crowd, saying “we love this country so much. We had a f—ing magical trip.”

Noise Pollution kicked off the encore and showed that what the new album may lack in psychedelic anthems of years past, it more than makes up for in sheer groove.

Hip Hop Kids and Holy Roller (Hallelujah) rounded out the night with “Thank you [insert city]” emblazoned across the screen – oh, you guys!

The full house at the Tivoli then exploded in applause for one of the hardest-working bands in the business.

Comprising vocalist-guitarist sisters Lily and Grace Richardson, Clews and their strong rhythm section shelled out a selection of ’90s-influenced guitar-pop bangers and ballads alike, calling to mind the likes of Blur at times.

Peterson, whose repertoire switched seamlessly between ’50s-inspired pop songs and up-tempo garage rock, delivered an energetic set with her three-piece backing band. Peterson’s soaring vocals were what really defined tracks such as 105 and Rats.