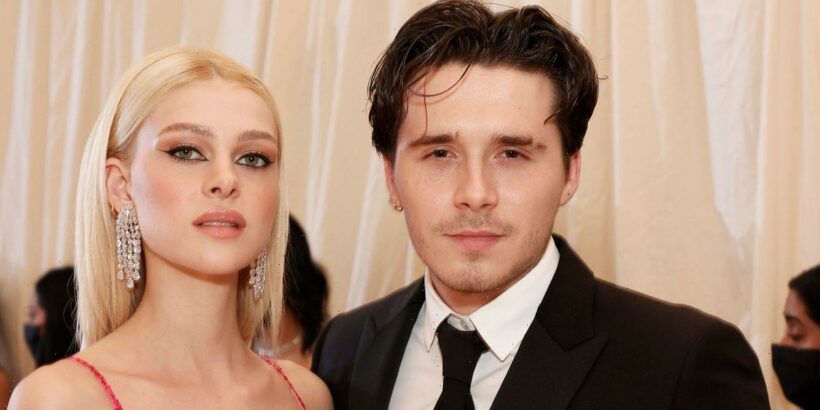 Brooklyn Beckham and Nicola Peltz have reportedly signed a giant pre-nup ahead of their lavish wedding ceremony.

David Beckham's son Brooklyn is set to recite his nuptials with American actress Nicola at her family's estate in Miami, Florida next Saturday (April 9).

The star-studded ceremony is rumoured to include the likes of TV chef Gordon Ramsay, actress Eva Longoria, Madonna’s son Rocco Richie, and the full members of the Spice Girls.

However, Brooklyn, 23, is thought to have signed a hefty pre-nup before marrying his billionaire heiress fiance Nicola, 27.

As both Brooklyn and Nicola have huge sums of money behind them from their families, the loved up couple have signed the strict prenuptial agreement to protect their assets should their marriage ever dissolve.

The Mail On Sunday reports: "Brooklyn Beckham is understood to have signed a prenuptial agreement with his heiress bride-to-be Nicola Peltz.

“The £380 million fortune of Brooklyn's parents, David and Victoria, is dwarfed by the estimated £1.3 billion wealth of Miss Peltz's financier father Nelson.

"News of the prenup comes as preparations for Saturday's £3 million ceremony and party at the Peltz family mansion in Palm Beach, Florida, gather pace.

Away from the legalities of saying “I do”, other details of Brooklyn and Nicola’s wedding have promised a very glitzy day – from the star studded guest list to the location.

Sadly, Brooklyn’s godfather, Sir Elton John, won’t be at the ceremony as his much-delayed farewell tour has ended up clashing with the big day after his tour dates got rescheduled. While Nicola has reportedly shunned the idea of wearing a Victoria Beckham designed dress and is expected to walk down the aisle in a Valentino gown and will be helped on the day by A List fashion stylist Leslie Fremar on the day.

Brooklyn and Nicola began dating in 2019 and became engaged in June 2020.

Announcing their engagement via Instagram, Brooklyn wrote: “Two weeks ago I asked my soulmate to marry me and she said yes. I am the luckiest man in the world.”

While Nicola wrote: “I can't wait to spend the rest of my life by your side. Your love is the most precious gift.”

Daily Star have contacted representatives of Brooklyn and Nicola for comment.