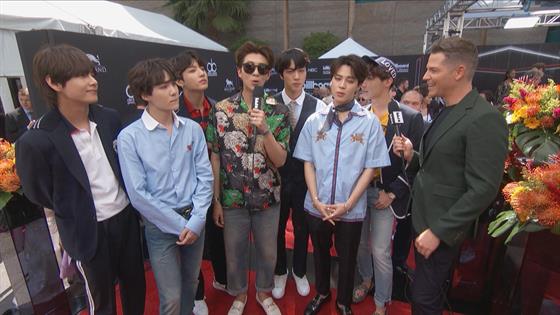 It’s all about social media!

BTS, America’s newest K-Pop sensation, stopped by the E! red carpet to with Jason Kennedy at the 2018 Billboard Music Awards and share everything from their newfound success to their ultimate rules for posting on their social media platforms.

“We cannot get use to it, it’s a miracle,” the band shared. “They are like the most amazing fans in the world.” Well you can say that again! All of their fans could barely contain themselves while Jason spoke to the group.

One of the reasons their careers have taken off is due to their amazing social media accounts. The guys revealed that they control what they are posting, but since there are seven of them, they have a few rules. “No drunken tweets,” the band jokingly shared!

Inside the 2018 Billboard Music Awards

The band will also be taking the stage later tonight to perform their newest single “Fake Love,” and revealed that they have been practicing for three months. “It will be more powerful than ever,” they shared with Jason.

We’re looking forward to it!