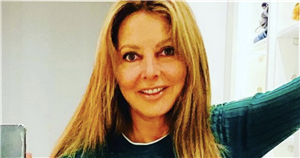 TV personality Carol Vorderman didn't leave much to the imagination as she pulled on a pair of tight-fitted trousers that appeared to have been sprayed on.

The bombshell, who turned 60 last Christmas, dazzled her 179,000 followers in a festive green top that boasted cut-out detailing across her chest.

Oozing sass, the Countdown super-brain beamed a huge smile to camera while modelling the figure-hugging garments that accentuated her hourglass proportions.

With her new blonder tresses groomed into a sleek and straight style, she blew fans away with her age-defying beauty.

Carol captioned the racy duo of images: "Lazy bird got her old boots on again… new @karen_millan top though.

"Off across the Severn Bridge in a min. Yessssss.

Meanwhile, Carol hit the headlines this week after she explained in an interview with OK! that she would be sticking a "virtual middle finger" up at those who had said she didn't dress her age.

She told the publication: "I love being this age. I can't be doing with people who aren't nice and I've never cared what people think.

"I have totally embraced 60.

The starlet admitted she didn't care what others thought about her or her clothes.

Carol explained her "free spirited" nature had often caused her to be a "rebel" throughout life.

She went on: "Mischief is my middle name and I do what I like.

"I've always been a bit of a rebel. I've never understood why people conform because society dictates it.

"I've always been a free spirit and questioned what the world 'should' means.

"I was told you should get married at 20 because that's what girls do. I said 'I'm not doing that' and became an engineer."