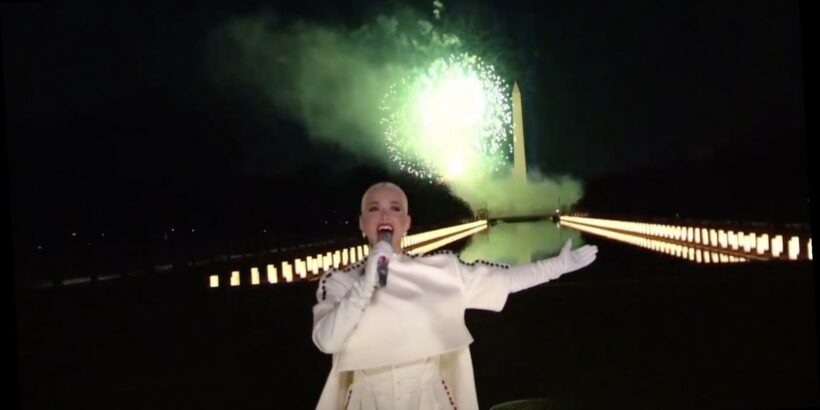 The night also included remarks from President Biden, who reiterated a call for unity and respect and spoke of optimism for the future — an outlook the event encapsulated. Vice President Harris also spoke during the event, addressing American aspiration and determination: “Even in dark times, we not only dream, we do,” she said. Former presidents Barack Obama, George W. Bush, and Bill Clinton also teamed up for a conversation, further highlighting the call for unity.

Bruce Springsteen opened the musical set, delivering “Land of Hope and Dreams,” a song he began performing with the E Street Band in 1999 that later appeared on the 2012 studio album Wrecking Ball. He performed the song on acoustic guitar while standing on the steps flanking the Lincoln Memorial on the National Mall. The musician has routinely voiced his support for Biden and in October narrated Biden’s “Hometown” Scranton, Pennslyvania-set campaign ad with “My Hometown” serving as its soundtrack.

During 2009’s We Are One concert, which celebrated the incoming Obama-Biden administration, Springsteen performed “The Rising” and also Woody Guthrie’s classic “This Land Is Your Land” alongside Pete Seeger and Seeger’s grandson Tao Rodríguez-Seeger. Now, 12 years later, he marked the former VP’s ascension to Commander-in-Chief to launch the night with a hopeful view toward the future.

Jon Bon Jovi, who campaigned for Biden, followed with a touching, faithful rendition of the Beatles’ “Here Comes the Sun” alongside his bandmates while on a pier in Miami, and, in a fortuitous moment, the sun broke through as they performed. Bon Jovi’s politically charged 2020 album dropped in October. The LP addresses mass shootings, disinformation, police brutality, racial injustice, and the pandemic, among other socially conscious topical issues, making his appearance in the lineup a fitting choice for a new administration facing the challenges left in the wake of former President Trump’s tenure.

Relative newcomer Ant Clemons and veteran Justin Timberlake teamed up for their set, which was broadcast from the Stax Museum of American Soul Music in Memphis, Tennessee. In many ways, Clemons’ appearance was indicative of aspiring artists’ American Dream. The singer told Rolling Stone he worked at Red Lobster and slept on friends’ floors as he worked to break into the writing-producing community. He eventually connected with Jeremih, then Kanye West.

On Wednesday, Clemons’ talents shone in the national spotlight as he performed “Better Days” with Timberlake. Their soulful vocals offered reassurance that “better days are coming.” The gospel-tinged set, which began inside the museum, soon spilled into the street as students and alumni from Stax Music Academy joined them with a band led by Adam Blackstone for the buoyant performance.

Foo Fighters delivered “Times Like These,” which Dave Grohl dedicated to the teachers, who, like his teacher mother Virginia and First Lady Dr. Jill Biden, “continue to enlighten our nation’s kids every day.” Grohl said the song has taken on new meaning in this era. Grohl told NPR that he originally wrote it while he was at a crossroads and at that time he “decided to choose hope and rebirth.” While the song dropped in 2003, he felt that “it definitely applies to what everyone’s feeling right now. You know when you say it’s times like these you learn to live again, it represents some new beginning. And I think a lot of people feel like that’s what we need right now.”

John Legend, who has played several previous Biden and Harris campaign and digital fundraiser events, performed an uplifting rendition of “Feeling Good,” beginning the song a cappella before he took to his piano for the jazzy set.

Like several of her fellow performers, Demi Lovato supported Biden and Harris leading up to the election; she partnered with the Lincoln Project for a political campaign ad featuring the Trump-criticizing “Commander in Chief.” From Los Angeles, she sang Bill Withers’ classic “Lovely Day,” backed by people from all walks of life around the country who harmonized the chorus as the Biden family watched the set from inside the White House.

In an unannounced appearance at the National Mall, Katy Perry surprise-performed “Firework,” the song reinforcing resilience as fireworks lit the Washington, D.C., sky to close out the celebrations.

The jubilant concert event capped off a day of musical inaugural events, which included Lady Gaga’s delivery of the National Anthem, Jennifer Lopez’s rendition of “This Land Is Your Land,” Garth Brooks performing “Amazing Grace,” and the New Radicals reuniting for the first time in 22 years to play “You Get What You Give.”