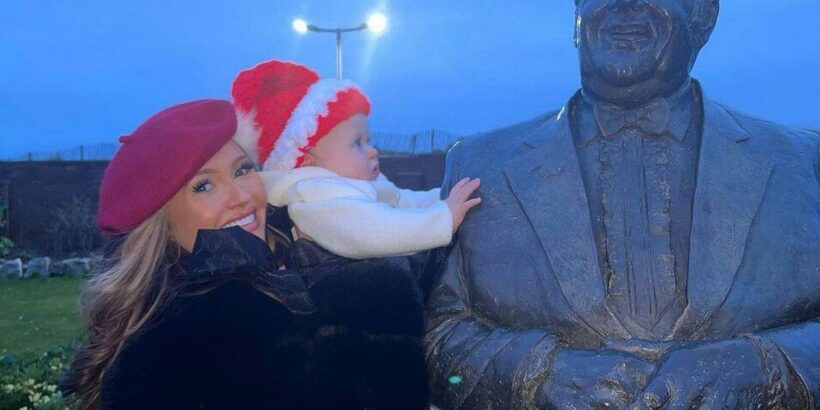 Charlotte Dawson visited her father’s ­statue on Christmas Day just like every year, but this year she had an extra someone paying tribute to her comedian dad Les – her baby son Noah.

The comedy icon, famed for his gurn and hilarious characters, died when Charlotte was just eight months old but she’s determined to make sure Noah gets to know his grandad – whether it’s visiting the monument to him in Lytham St Annes, Lancs, watching his shows on TV or tuning into YouTube footage.

Charlotte, 29, says: “Every Christmas we go to my dad’s statue and dress him up, have a picture and give him a cuddle. This Christmas was Noah’s first time and we had an amazing time.

“I can’t wait for Noah to get to know his grandad through all the pictures and videos, we’ve got so much ­amazing footage he can watch.

“His grandad is Les Dawson – how cool is that? – and he would have been the best grandad.

“He would have constantly been having a laugh with Noah, playing games with him, doing funny faces. It upsets me that he’s not here now in Noah’s life, being the fabulous grandad I know he would be.”

Charlotte believes Les, who died from a heart attack in June 1993 aged 62, is still watching over her and her family. And she thinks Noah, who was born in January last year, might have inherited her dad’s funny genes.

And Noah is why Charlotte, who’s engaged to former rugby league player Matthew Sarsfield, has embarked on a new healthy lifestyle and shed more than 3st.

Les suffered from Type 2 diabetes before his death and in June last year the doctor warned Charlotte she would also end up with the condition if she didn’t make changes.

She had already suffered from gestational diabetes during her pregnancy but mistakenly thought afterwards she could just go back to eating her favourite takeaways and junk food.

Charlotte says: “The doctor said my blood sugar was sky high and if I’d come in two months later, I’d be on insulin. He said you need to get fit and healthy now.

“My dad didn’t listen to anyone and I honestly believe if he had listened to the doctors and my mum a bit more, he would probably still be here and he’d be in Noah’s life. That’s what breaks my heart, it really does.”

She says: “As soon as I popped Noah out, Matthew went to get me a McDonald’s, that was my push present. Some people get Louboutins, I got a Maccy’s. Then I carried on eating my XXL chips and gravy, pizza. My only exercise was moving from the couch to the fridge. I was a nightmare.”

Charlotte worked with nutritionist Jo Travers and trainer Emma Titelbaum who showed her 15-minute fun, dance-based Zoom routines which she could fit around caring for Noah.

She says: “They’re based on different dance styles like line dancing, ballet or 70s disco, but they do get a sweat on. And the thing is they’re actually fun, so you don’t notice you’re working out.

“I just want people to feel happy, have fun and blast some bellies!”