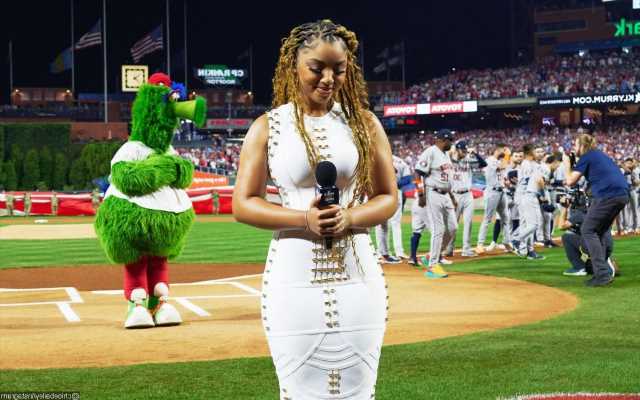 The one half of Chloe x Halle shows off her vocals while singing her soulful take on ‘The Star-Spangled Banner’ during the game between Houston Astros and Philadelphia Phillies.

AceShowbiz –Chloe Bailey was honored as she was chosen to sing national anthem at the World Series Game 3 on Tuesday, November 1. The one half of Chloe x Halle belted out “The Star-Spangled Banner” in front of sport fans at Citizens Bank Park in Philadelphia, Pennsylvania.

Looking stunning in a white gown, she showed off her vocals while singing her soulful take on the national anthem during the game between Houston Astros and Philadelphia Phillies. While the 24-year-old star earned huge applause from the crowd, some Internet users appeared to have different opinion on her performance.

“Should’ve kept it classic. It’s a hit or miss when you try to make the national anthem your own,” one user commented. “Sounds very nasally and pitchy but must be very nerve racking,” another critic wrote.

Echoing the sentiment, someone else said, “Had to be nervous because she usually never miss. Idk why ppl don’t keep it simple when singing the national anthem….they should just play a recording of the best one ever performed…Whitney Houston‘s version.”

“She’s just all around cringey. She over does everything to the point of perpetual embarrassment,” one person added. Another naysayer simply penned, “That’s a no from me dawg.”

However, some fans thought that Chloe nailed the performance. “She sings beautiful and is gorgeous. I knew Philly was gonna be lit and put the Astros off. They wild over there,” one of them raved. “She is so talented and beautiful. We all know this, singing live on a field with screaming fans isn’t easy,” another gushing comment read.

Defending Chloe, one person praised the singer for having the confidence to sing the song in front of big audience. “At least she has the confidence to do it and that’s all that matters,” a user noted. “national anthem done right!! literally not too much and not too little, just right,” another person opined.

Chloe, meanwhile, took to her Instagram account to share a video of her performance. “it was honor to sing the national anthem at the world series tonight in philly,” she wrote in the caption. Fans left gushing comments underneath the post with one of them reading, “Iknow Your mom is beyond proud of you n your sister . Great job.”