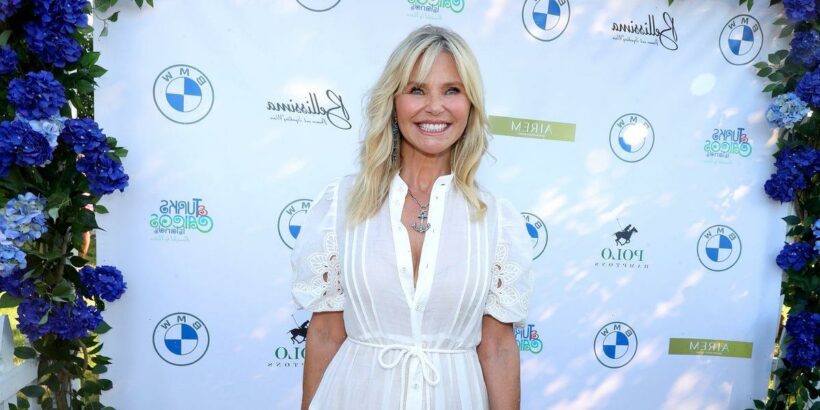 Christie Brinkley showed off her ageless good looks as she posed for a picture with her "mini me" daughter Sailor Brinkley-Cook.

The blonde bombshells could pass for twins in the stunning shot taken at a garden party for designer Michael Kors.

Christie looks far younger than her 67 years in a flowing, white halter-neck dress and with her golden curls bouncing over her shoulders.

Sailor is the spitting image of her supermodel mum in a deep purple sequinned dress with several belts wrapped around her slim waist.

The 23-year-old – who has followed her famous mum into modelling – also wore her blonde locks loose down her back.

Fans could not get over the similarities between the striking mother-daughter duo in the pic, which Christie shared on Instagram.

“You and Sailor are looking more &and more like twins,” said one person in the comments section, while another said the pair both looked “absolutely beautiful”.

“Are you sure you and Sailor aren't sisters?” one person asked.

Another told Christie that Sailor was “definitely your mini me”.

“I'll have whatever they're having,” quipped another.

The bash was held to celebrate Kors’ career.

Christie posted: “Celebrating 40 years of the iconic American Style of the adorable legend @michaelkors in the chicest garden of hosts extraordinaire Jon and legs for days @tizzielisch and co hosted by the lovely and glamorously cool @naomiwatts plus strawberry shortcake all on a gorgeous Summer night!

"Thank you all for including @sailorbrinkleycook and me! PS Thank you @owengould for our new haircuts! #heresto40more! At least!”

The star also gave fans a peek at the menu, which included hamburgers and beef hot dogs “with all the fixings” and lobster rolls on brioche.

“It looks delicious!!” exclaimed one fan, while another said it was an “awesome” selection.

Christie rose to fame as a model in the early 70s and became known for her sizzling Sports Illustrated Swimsuit shots.

Sailor – whose dad is Christie’s ex Peter Halsey Cook – is a model now too and in 2017 she made her own debut in the Sports Illustrated Swimsuit issue, alongside her mum and her half-sister Alexa Ray Joel.

The following year she got her own spread in the magazine.