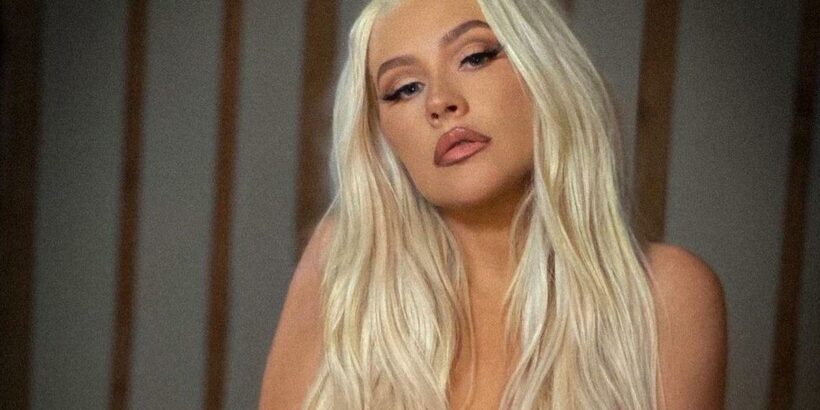 Christina Aguilera has wowed fans on Instagram as she stripped topless for her latest snaps.

Posting to Instagram on Sunday, the Genie in a Bottle singer looked flawless as she posed for two photographs in front of a dressing table and mirror wearing nothing but a pair of blue jeans and a chunky chain bracelet.

Christina wore her blonde hair long, with hair extensions cascading down her ample bosom and down to the waist of her jeans.

In the second image, her arms are raised above her head, which fans were convinced was a call back to the cover art of her 2002 album Stripped.

She captioned the post: "One week until @ladylandfestival. Who's going to be there?" Christina could also be seen wearing eyeliner, eye shadow and dark lipstick and lip-liner in the images.

She shared the post with her 7.6 million Instagram followers ahead of her appearance at the LadyLand Festival in Brooklyn, New York this weekend.

The Burlesque star, who turned 40 last December, is set to headline the event which will also feature Caroline Polachek, Skin, Aquaria, and Nina Sky. Quick to respond to the post were Christina's legion of admirers, who praised the "beautiful" photos.

A third replied: "PERFECTION. I LOVE YOU MOMMY."

Meanwhile, a fourth responded: "The most beautiful woman."

Christina's pictures have over 705,400 likes so far, with the songstress recently backing her Mickey Mouse club co-star Britney Spears in her ongoing conservatorship court case. Posting to Instagram back in June, Christina wrote: "These past few days I've been thinking about Britney and everything she is going through.

"It is unacceptable that any woman, or human, wanting to be in control of their own destiny might not be allowed to live life as they wish.

"To be silenced, ignored, bullied or denied support by those 'close' to you is the most depleting, devastating and demeaning thing imaginable."