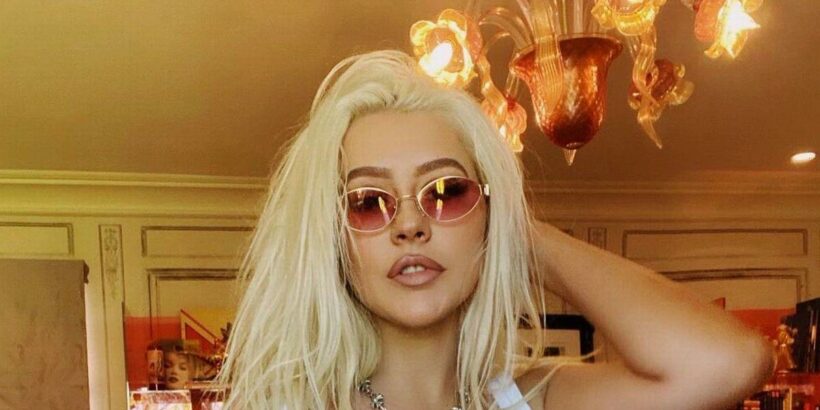 Christina Aguilera certainly doesn't shy away from flashing the flesh and often drives her legion of adoring Instagram fans wild with a risqué cleavage reveal.

The 40-year-old superstar did just that as she took to her Instagram to show off her body in a series of seriously hot snaps.

Eagle-eyed admirers were sure they'd stumbled across what could be potential new album covers.

In the images, the blonde bombshell looked sizzling as she posed up a storm for a number of scorching snaps.

One pic in particular demanded attention, with Christina's famous assets stealing the show from a side angle.

Rocking a black halter-neck top that appeared to be lacking any free-flowing material at the side as the garment gaped open exposing lots of bare flesh.

The Genie In A Bottle hitmaker stunned as she glanced down showing off her fluttery lashes as she worked her magic in front of the lens.

Taking us on a journey in time, she styled her platinum locks into voluminous beach waves – much like the wild and striking hairstyle she'd rocked as part of the Lady Marmalade hit video.

Other snaps saw the music legend laying herself bare in the sand while wearing a figure hugging boob-tube dress that left very little to the imagination.

Given the number of promiscuous images, it's no surprise really that Christina's social media feed was brimming with gushing pleasantries.

One fan said: "You're stunning," before asking "when is the new album coming out?"

Another begged with the caps lock on: "RELEASE THE ALBUM."

While a third chimed her own lyrics: "You are beautiful, no matter what they say."

Meanwhile, the rumour mill was sent into a spin after speculation mounted that Christina could be about to marry her long term beau and fiancé Matthew Rutler.

Fans and loved ones are no doubt eager for this ceremony to happen, with the pair having been engaged since 2014 – years after meeting on the set of her musical film Burlesque back in 2010.