Christine Anu clearly remembers the moment she found out her soul hero Aretha Franklin had died in August.

"I was in Perth when the news came through. My daughter, who's 16, we were on Aretha watch. And she sent me a text and said our queen has flown away. I thought to myself, 'I'm going to deal with that later'," says Anu, who released a tribute album, Rewind: The Aretha Franklin Songbook, in 2012. 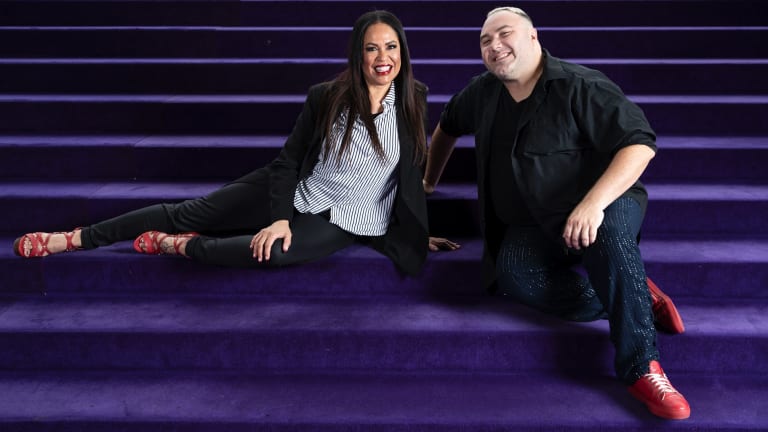 Christine Anu and Trevor Ashley are primed for the Hear Me Roar concert at the Opera House.Credit:Louie Douvis

So when Anu was asked to take part in Hear Me Roar, a concert rejoicing in the influence of female musical talent with cover versions of songs from Madonna, Carole King, Dolly Parton, Annie Lennox, Amy Winehouse, along with a special tribute to Franklin, Anu couldn't say no.

"When I was approached the concept sounded amazing, because at the time I don't think I had a proper chance to grieve the great Aretha Franklin," she says.

"It's an interesting cast, quite a spread of genres, and really powerful voices within our fields," Anu says. "It's going to be amazing to hear these women roar and to roar alongside them."

The concert is the brainchild of drag and cabaret performer Trevor Ashley, a man with a deep appreciation for divas in all their forms. He saw it as an opportunity to pay homage to some of the pop classics that he felt were underappreciated for their long-lasting global impact.

"I wanted to do a show that celebrated all the great female singer-songwriters," says Ashley, who is directing and producing Hear Me Roar. "A lot of these songs that we're doing, even though some of them were just seen as pop songs, the message that they're conveying I think has helped shape women and the women's movement."

The set list includes such empowerment anthems as Respect, Express Yourself, You Oughta Know and I Am Woman.

Ashley is delighted Hear Me Roar will follow in the not-too-shabby footsteps of Beyonce, who famously tours with an all-female band, with the show boasting an all-woman eight-piece group backing up the vocalists.

"To actually get female brass players and a drummer and everything, it's so rare you see it, you never do," Ashley says. "An all-female string section maybe would be easy, but a proper rock band? That's going to be really fabulous. We want a big sisterhood on stage all working together."

And how is it for Ashley being the only man in the midst of such a glorious oestrogen overload? "Oh, I love it. I've impersonated divas for years, so to actually work with them and do something like this … obviously I feel I was very qualified for putting a show like this together. People are going to have a great night, there's no way that they won't."

As for Anu, she will be satisfied if the audience gets so swept up in the party atmosphere they end up hoarse from belting out the tunes. "People might be leaving without voices, because they'll be so happy singing along."

Hear Me Roar is at Sydney Opera House December 13-14.