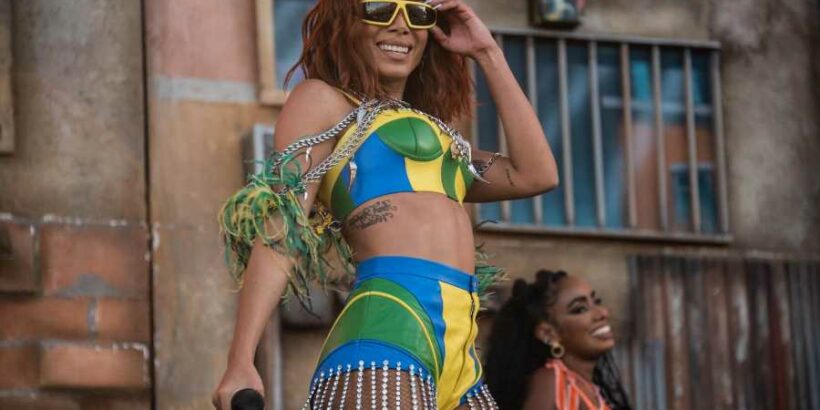 After two years of Covid-related cancellations, the world’s most famous music festival is back in full force. As Coachella goes, so goes the rest of the live music business. And Coachella’s first day on Friday was a clear statement: Hundreds of thousands of (overwhelmingly maskless) festival-goers returning to the desert showed that the world’s largest stages won’t stay restrained any longer. Here’s a roundup of what stood out most as we took in the fest’s first day, from knockout performances to fashion trends and the parking lot from hell.

Harry Styles Welcomes Coachella — and Shania Twain — to Harry’s House
Just a few months removed from the first leg of his wildly successful Love on Tour run, Day One headliner Harry Styles seemed loose as ever during an excellent headlining set that included a guest appearance from Shania Twain and the debut of two new songs off his upcoming album Harry’s House: “Boyfriend,” which featured beautiful multi-part harmony and plucking guitar, as Harry crooned about the shortcomings of a bad boyfriend, and “Late Night Talking,” with its Eighties disco beat mixed with an infectious horn section.

After country-pop queen Twain turned up for a surprise rendition of “Man! I Feel Like a Woman!” the two sat the front of the stage and performed Twain’s 1998 hit “You’re Still the One,” which Styles has previously sung live with Kacey Musgraves. “This lady taught me to sing,” Styles said of Twain. “She also taught me that men are trash.” With that, Twain cracked up and the crowd roared.

Elsewhere, Harry was his typical playful self. “We’ve got 12 minutes …,” he said about 40 minutes into his set, as the crowd began to moan in protest; ” — of dancing,” he continued. “I may be quick at some things but this is not one of them.”

What Pandemic?
In February, Coachella promoter Goldenvoice pulled back all pandemic-related precautions for the festival including proof of vaccination and negative Covid tests. Prior to the festival, a common question among observers was how vigilant attendees would be about masking up and staying cautious without any policy in place. Not very, as it turns out. Of the tens of thousands of people in attendance for the first day of Coachella, almost no one we saw was masked.

Idles Say Yes to the Dress
A male artist wore a dress during his Coachella set and it wasn’t Harry Styles. Mark Bowen, guitarist for prolific British rockers Idles, turned up for the group’s high-octane set wearing a flowy nightgown, eventually heading offstage to be hoisted by the crowd during the band’s performance of “Danny Nedelko.” Is there anything more punk rock than seeing a man shred on guitar while wearing a dress that belongs in Little House on the Prairie?

Bowen and frontman Joe Talbot, who caught up with Rolling Stone Friday afternoon before their set, spoke about their place on a festival bill conspicuously light on rock. Both members rejected the idea that they were representing any one area of music.

“For us, we’re a talisman of joy, and violence and brilliance live,” Talbot says. We want to create an energy that’s unsurpassable every night. That’s just Idles; that’s not rock & roll. We’re fans of all music and want to be on the forefront of music, not just rock & roll.”

As Bowen says: “I think the internet and the way people consume music has devolved that tribalism in music. We don’t feel that different from Slowthai — it’s about the energy. There’s bands that are high octane that you know will give you a certain catharsis, and then on the flip side you have your acts like Phoebe Bridgers, who have a different context. But it’s not about genre anymore.”

Anitta Delivers a Headline-Worthy Performance
Anitta brought the beauty and culture of Brazil’s favelas to the desert during the most high-energy performance of Coachella’s first night. There was no better way to kick off her show than Snoop Dogg smoking a blunt during “Onda Diferente.” And would it even be an Anitta show without some booty-shaking lessons? Anitta owned the stage during her viral “Evolver” as she literally climbed on a dancers and shook her behind nonstop. During “Faking Love,” she brought out the Icy Grl herself, Saweetie, before being joined by Diplo for a medley of dembow-filled tracks. Brazil was definitely present.

Staying Safe Out There
Arcade Fire didn’t even make it 15 seconds into their nostalgia-laden set before Win Butler abruptly paused during their first song calling for medics to help someone in the crowd. With the shadow of the Astroworld tragedy still looming over the live-music industry, it was a welcome tone-setter met with a roar from the crowd.

Got Our Peaches in the Desert
Daniel Caesar delivered a romantic, vibey performance, before fans at the main stage — tipped off by a TMZ story — awaited Justin Bieber’s arrival for a rendition of their hit team-up0 “Peaches.” The surprise performance from one of the world’s biggest male pop stars made for a fun addition to an already-stacked Friday lineup.

Kings Wear Pink
We were reserving the headline “Pink Friday” in case rap royalty Nicki Minaj came out with Lil Baby. But she didn’t. (Coachella, make Minaj a headliner next year. Please.) Instead, Friday’s pink showed up in the attire of two of the night’s finest crooners: Omar Apollo and Pink Sweat$. Apollo rocked a full pink suit over a body-fitted tank top as he played songs from his recently released Ivory. “Where the fuck are my homosexuals at? I’m about to get real sexy in this bitch,” Apollo asked with a smile before performing “Killing Me.”

As for Sweat$, he kept things romantic as he chose a couple in the crowd to serenade with his unmatched vocals threw carnations into the audience, and was joined by Sabrina Claudio for “Waiting on You.”

Bucket Hats and Tejanas Galore
Bucket hats decorated with Snoopy prints, camo designs, and purple cheetah patterns sat on the heads of countless festival-goers who took over the campgrounds on Coachella’s first night. Some fans also rocked personalized variations of cowboy hats: String-light-decorated pink ones, classic tan ones, and even disposable plastic ones overtook the audience as both Grupo Firme and Harry Styles performed on the main stage. It was the perfect, fashionable shade from the scorching sun and an apt accessory for a night of surprises.

¿Dónde Están Los Tóxicos?
The Mexican pride shone bright on the main stage when Grupo Firme hit the stage. The regional Mexicano heavyweights brought the accordions, tubas, and their eccentric outfits to Coachella, as the sun began to set upon the festival grounds. “We’re trying to bring what it is to be Mexican so people can see us in a different light — not in the typical boots and cowboy hat way,” Eduin Caz, the group’s frontman, told Rolling Stone at Casa Google several hours before their set. “We dye our hair, we dress differently. We’re here to show off our roots.”

The band sat poolside discussing last-minute changes to their stacked set list — which ended up including a cover of Karol G’s “Tusa” and their best hit “Ya Supérame” — earlier in the day. “We’re here to break barriers. Music doesn’t have borders. There’s no need for us to change so people love us,” Caz explained. “We want people’s eyes glued to the stage.” That was absolutely the case, as Spanish-speaking fans yelled the lyrics while others stood in awe as the biggest Mexican band in the world completely dominated the stage. Fans waved their Mexican flags and gave their best gritos during the set while the group’s core members took shots and chugged beers in between songs. To quote Caz on stage: “Arriba Mexico, cabrones.

Post-Apocalyptic Parking
“Exiting the Coachella parking lot is akin to mad max: fury road,” one fest-goer tweeted in the wee hours of Saturday, perfectly summing up the bleak conditions we too experienced getting to and from the fest. We’re praying for smoother logistics tonight as we gear up to head back and do it all again.