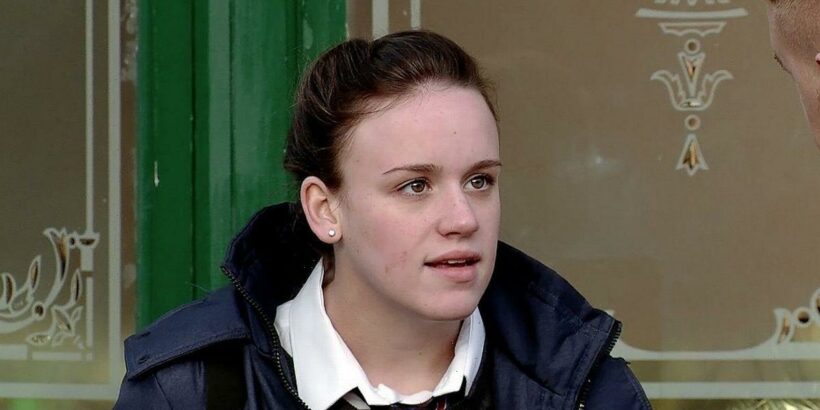 The 20-year-old star, who currently plays jailbird Faye Windass on the cobbles, had fans convinced she’d shaved her head with the glam new snap.

Paired with turquoise-tipped acrylic nails and pale pink lipgloss, she looked beach-ready as she posed with one hand covering her temple for the glamorous Instagram shoot.

She paired the cute look with a pair of pink gem earrings and mascara to give her lashes a volumous look.

Her brunette tresses looked to be tied into a tight ponytail – but only a small section was visible, convincing fans the Corrie star had gone for a dramatic change-up.

Ellie simply captioned the snap with a pink flower emoji, as fans flocked to the comments section to share their haircut theories.

Her Corrie co-star Charlie De Melo, who plays Imran Habeeb on the soap, was the first to post: "Legit thought you’d buzzed your hair off for a second there! FYI I would’ve approved 100%."

Ellie hinted that she wasn’t ruling the possibility out, as she responded to his comment with: "Hahaha why does everyone keep thinking that!!! Glad you’d approve though, maybe I might."

Another fan wrote: "I thought you’d shaved your hair omgg (you would look stunning with buzzed hair though just like you do now!” with a love-heart emoji.

"When I first looked I thought you had shaved your hair off!” someone else posted, as a fourth penned: “You would so much suit a number 1 cut!"

Plenty more fans were on board to label Ellie "stunning", with one posting: "So beaut!"

Another chimed in: "Beautiful as always El!"

Even former cobbles actor Harry Visinoni, who played the late Seb Franklin, headed over to the snap to give it a cheeky ‘like’.

Ellie was quick to dispel the rumours that she might have braved the buzzcut, quickly posting to her story: "Do I actually look like I’ve shaved my head? I HAVEN’T!" with a bandaged head emoji.

Ellie’s character Faye is currently locked behind bars after admitting to attacking Adam Barlow in the bistro, despite meaning to injure villain Ray Crosby after he sexually assaulted her.

She first appeared as Faye way back in 2011, admitting to Lorraine: "I’m not going anywhere for the time being – or hopefully ever.