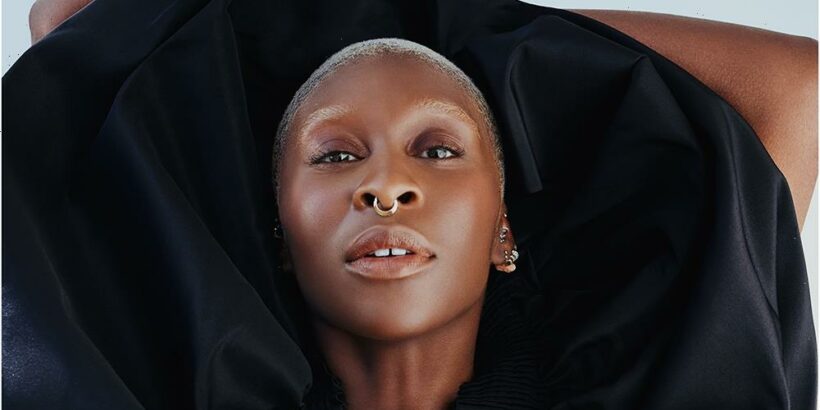 From the Venice Film Festival to the Met Gala, the Emmys to training for a half marathon, Cynthia Erivo manages to find moments of pause in her jam-packed schedule. While blurs of kinetic energy roil around her, the London-born multi-hyphenate sits serene at the center.

“Sometimes I’ll get a nice couple of hours of sleep on the plane,” she laughs. “But I’m not very good at doing that.” Only an Oscar away from an EGOT, it’s hard to argue with the results, as Erivo has quickly made a name for herself not only on the Broadway Stage, but on film and television as well. She’s even set to release a children’s book entitled “Remember to Dream, Ebere.”

While we get to know a bit of Erivo in every role she takes on, her new album — her debut of songs she has co-written — further highlights the artist at the core. Infused with the heights of classic soul, the diverse structures of modern R&B, and soaring pop hooks, “Ch. 1 Vs. 1” showcases the complex emotionality that helped Erivo rise to prominence on the stage. It’s all tied together by her magnetic voice, which was most recently heard in her starring role as Aretha Franklin in the latest series of “Genius” on National Geographic. From “The Color Purple” on Broadway to the title role in 2019’s Harriet Tubman biopic, Erivo has shown a deft ability to capture the details of the inner lives of people in unimaginable circumstances, as well as the grand scale of an entire world at a turning point. Now she’s here playing herself, expanding that strength as a vocalist and songwriter.

Variety caught up with Erivo to discuss the origins of “Ch. 1 Vs. 1,” the different expectations of music and film audiences, and tapping into her Nigerian heritage.

You’ve got an album coming out, as well as a children’s book, and roles in TV and film. How do you compartmentalize it all?

Cynthia Erivo: I just keep asking everybody for reminders about what the schedule looks like! It helps me understand where I am. It’s a very Capricorn thing for me — I find organization really helpful.

Were you actively working on other projects at the same time as creating this album? Is it difficult to work in character, and then shift to working under your own name?

I was doing “Genius: Aretha” at the same time while we were finishing up the vocals. I created a little studio in the house where I was staying, with all my studio equipment in one of the bedrooms. [It was] crazy, but I’m glad I did it because I was consistently getting inspiration and learning. Whenever I’m playing a role, the idea is to sit with it as closely as I can to myself so I understand what their mission is, what their story is, what they want. Most people come from a place of truth, even when they’re not being truthful. And so my job is to portray and express what is necessary to tell Aretha’s story; I separate myself from that for my own creativity, my own songs, my own story.

There must be some creative ritual or process needed to tap into a role like Aretha, but do you then need to actively tap back into the “role” of Cynthia?

I’m lucky enough to be one of those people who fell into being who I am really early. I realized very early on that I’m either going to have to be okay with myself, even if other people aren’t, or suffer for trying to make myself fit into what everybody else expects of me. I’ve been very comfortable in my skin for a long time, so writing about me, who I am, where I’ve come from, and the things I’ve been through isn’t necessarily hard for me. It was actually more like a relief to be able to share more with people.

There’s also a strong cultural and even political sense to your music. I know you’ve mentioned Miriam Makeba as a touchstone.

She was a badass, man! There’s no one like her. I can’t remember what festival it was, but I was with my mum in London a long time ago and she was one of the performers. I just thought she was beautiful. I’d never seen anything like that. She was onstage and she was wearing traditional clothing. She had all the jewelry, all the headwear, everything. And she had dancers on stage with her as well, traditional dancers. And then the sound that she makes and the use of her voice almost like an instrument, that’s one of my favorite things that she did. She was just so special.

How did your children’s book come about?

I was asked to write a kid’s book a while ago and originally said no, because I didn’t want to do it unless I had the idea fully formed and I could write it myself. It means a lot to me to be as authentic as I possibly can when it comes to writing things and being a part of that process, so I just didn’t want to do it if I couldn’t do it properly. And then one day I was in the shower and the idea dropped in. I realized that what I could talk about is something that I was actually living myself: the idea of being able to dream big dreams, but dream them in detail.

I write a list at the end of the year to describe the things I want to happen and I put as much detail in those wishes and dreams as I possibly can, down to the color of something or the time span. I feel like doing that tells the universe, or God, or whatever you believe in, that you’re ready and willing for those things to happen. And so I wanted something that felt really simple, an easy way to teach children that their dreams are very, very valid, that the big dreams that they have are never too big, and that to make those big dreams come true, fill them with all the detail you can find, fill them with everything you can imagine. That’s actually how these dreams come to fruition. That’s what this book is about. It’s illustrated by an amazing illustrator, Charnell Pinkney Barlow, an incredibly talented black woman who came to the rescue and created a really beautiful, almost water-color piece of art for both parent and child to enjoy. It’s bedtime-friendly and will encourage positivity.

Starting the album with a song like “What in the World” honors that tradition brilliantly with its massive scope and blend of soul, polyrhythms, and electronics. Can you tell me a little bit about your vision for the instrumentation of the album?

I think it’s because of the wide range of music that I have listened to in my life. The electronics come from my love of the Eurythmics. They were consistently using electronic sounds. Poly-rhythms probably come from the traditional Nigerian background that I have. On “Tears”, there’s a vocal that comes in at the end that is very reminiscent of traditional Igbo music. R&B is the root of a lot of music that I have been listening to, but my mum had an obsession with Kenny Rogers and Dolly Parton. There’s not a song on the album that feels very country, but that’s a familiar sound to me…There are places where I’m using the top end of my voice, and it feels airy and floaty. That’s sort of a call to a time where I was consistently listening to Kate Bush. And then obviously I’ve been listening to Aretha for a long time, not only while I was playing her, but over the span of my lifetime.

Does your connection to music date back to your childhood?

My mom would play music day and night. She had such an eclectic taste, so she’d just pass it onto me. She was a lover of reggae, particularly Bob Marley and this artist named Lucky Dube. She also loved Aretha and Diana Ross, and a band called Boney M. And then we have this radio station in London called Magic FM, which played everything from Mike and the Mechanics to Aerosmith, to Aretha, Patti Labell, Adele, Amy Winehouse, Mary J. Blige, George Michael, Peter Gabriel — everything. That’s what I was constantly being fed and is the root of the love of music that I’ve had my whole life.

When you started the album did you have an idea of what you wanted to talk about?

It felt like a piece in three movements: the world, love, and home. I talk about the world at large and people outside of myself, I talk about love that I’ve experienced; heartbreak, passion; and then about family and the personal. I knew that I wanted to share songs that felt very connected to who I was. That was always the aim, to make sure that all of the songs that were written were close enough to me so that people could learn something new.

Does acting engender that feeling of wanting to reveal more of yourself elsewhere? Do you think that you would have had those same instincts if you hadn’t built this career on Broadway first?

I know that whatever I would have written earlier on would have still been honest, but I don’t know whether it would have been this collection of songs. I would love to have been doing this way earlier, but I have had a space to really drop into myself in the last few years. To be here in this moment, to be able to express who I am and also to take the time to reminisce and reflect on what’s happened is really special.

Whose expectations do you think are heavier, movie audiences or music audiences?

For me, those audiences are starting to converge. Some of the audiences that see me on film and TV are only just now realizing that I sing. That’s always a really fun discovery — like, “Oh my God, this person is an actual singer.” And then there are people who only know me as a singer and who are starting to recognize that this is the work that I’m doing on television and on screen. I can see it in how many times people ask me if that was really me singing as Aretha. I’d be like, “Yeah, that was me. That’s my voice.” [laughs]

I suppose that’s a strange kind of compliment!

Oh, it’s definitely a compliment. There are people who don’t do that with [music-based] projects. Sometimes you have people who are singing and then the actor will mime to the voice. But I was doing all of it. I love that. It’s a lovely compliment.

As a title, not only does the “Ch. 1 Vs. 1” imply some sense of beginning, but it also suggests continuity, a connection to whatever comes next. There’s an implication that there’s another chapter and verse coming. Do you see your next project as an extension, as another chapter?

I don’t know if it’s going to be called “Chapter 2,” but it might very well be. We might jump a few chapters or I can have multiple chapters within the album. But I love the concept of being able to start right at the beginning. It gives me the room to grow and move forward, and it invites people to stay on the journey with me.