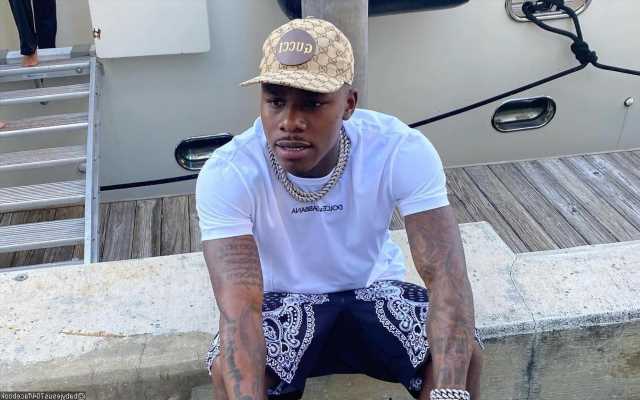 July last year, the ‘ROCKSTAR’ hitmaker brought out Tory Lanez right after Megan Thee Stallion’s set at Miami Festival despite everything that was going on following the shooting incident.

AceShowbiz –DaBaby has opened up about how his infamous Rolling Loud Miami performance affected his career. In a new interview, the “ROCKSTAR” rapper, who was canceled for his homophobic remarks he made at the event, confessed that he lost $100 million.

During a sit-down with Hot 97’s “Ebro in the Morning”, the 30-year-old hip-hop artist recalled, “Three viral moments that night.” Host Ebro Darden then brought up Megan Thee Stallion‘s fans being angry with him because of Tory Lanez‘s involvement in the show. At that point in time, the “Baby on Baby 2” artist and the Houston Hottie were sitting atop several hit collaborations.

“I ain’t into all of the conspiracy theories, this and that, until you see it really cost a n***as a $100 million within a year’s span,” so shared DaBaby. Ebro wanted to know why the rapper, born Jonathan Lyndale Kirk, thought it would be a good idea to bring Tory to the stage following the shooting accident.

In response, DaBaby said, “I don’t look at it like good or bad. I ain’t that invested into they business.” The Ohio native further stressed, “I got a song with him that’s doing good.” He later added that he wasn’t trying to antagonize Megan but he suggested that the “Savage” hitmaker was upset about something personal.

Elsewhere during the interview, DaBaby addressed the controversial “Boogeyman” lyrics about his alleged sexual escapades with Hot Meg. “The song been done for real, for real. Damn near going on a year,” he defended, “When I say something, it’s gon’ go out.”

As for why he decided to bring up their alleged relationship, DaBaby coyly responded, “It is what it is. I said a long time ago, keep me out the business. It’s a song. It’s out right now. N***as can take it how they want to take it.” Despite the backlash he received from the track, the “BOP” emcee still opted not to change the lyrics. “I don’t change lyrics though. It don’t matter what I say.”