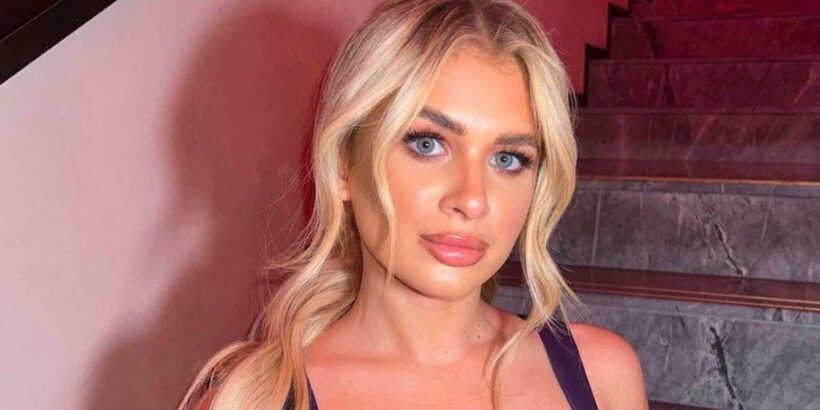 Liberty Poole has sent heatwaves through social media when she showed off her famous figure in leather crop top.

It's been a busy few weeks for the Love Island star as she's recently signed up to next year's series of Dancing On Ice.

The 22-year-old stunner has also bagged a five-figure deal with a lingerie brand, Boux Avenue, which means she's launching her own 15-piece collection.

However, she still found time to pose up a storm in a plunging purple leather top which certainly highlighted her enviable assets.

Liberty looked sensational as she sported the strapped leather piece which was cropped tightly above her waist.

The blonde bombshell wore a glossy black mini-skirt alongside the lush leather top in a look that simply oozed sex appeal.

She looked furiously glam as she let her long blonde locks flow onto her shoulders, having been dolled up by celebrity hair stylist, Carl Bembridge.

To top off the sexy look, Liberty was clutching a chic black purse which complimented her classy black heels.

Taking to Instagram to dazzle her fans, she referenced the popular film Mean Girls when she quipped: "On Wednesdays we wear PURPLE" as she attached a purple love-heart emoji.

Liberty's friends and fans were left swooning at the reality star's outfit, with many rushing to the comments section to flatter the babe.

Francsesca Allen, who starred on Series 5 of the ITV dating show, penned: "Gorgeous"

It comes as Liberty has been seen modelling an array of steamy lingerie sets as she's struck up a lucrative five-figure deal with Boux Avenue.

Speaking on the collaboration, Liberty said: "I am super excited to be working with my ultimate favourite lingerie brand Boux Avenue on my very own first Liberty's Love edit!

"I constantly wear their lingerie as it's so stunning whilst being supportive which is a must for me!

"It has also been a dream to work with a brand that holds the same female, self love empowerment values as I do, as we all deserve the best and to feel the best."

Dancing on Ice returns to ITV in January 2022