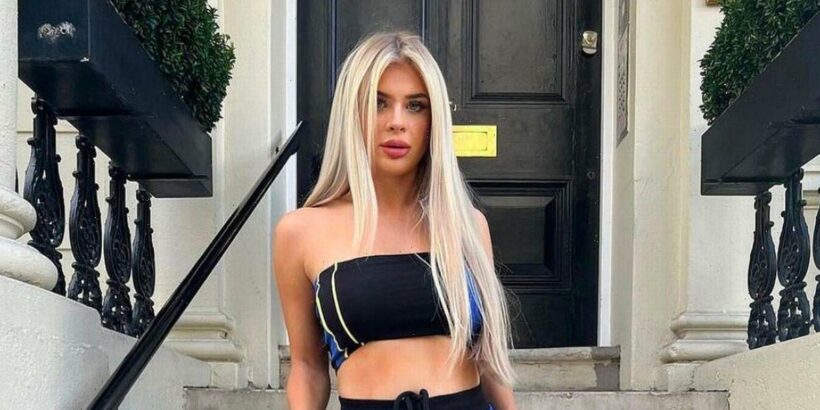 Former Love Island babe Liberty Poole has wowed her fans as she looked nothing short of breathtaking following a series of snaps posted to her 1.5million Instagram followers.

Liberty, 22, who is gearing up for a stint on Dancing on Ice, posted the snap to her Instagram profile as she sported a tight fitted monochrome tracksuit bottom in black, blue, neon yellow and white, paired with a mini cropped black bandeau top with deep blue and neon yellow stripes.

The Brummie influencer captioned it: "Bad vibes simply don't go with my fashion. Styled by @ellisransonx"

With white open-toed heels and matching white-painted nails, Liberty posed with her back to the camera before transitioning and facing the snapper as she walked down a set of patio steps in the three sizzling shots she shared.

Lib hit a whopping 80,000 likes as her friends, fans and followers immediately flocked to fawn over her, including fellow islander and bestie Kaz Kamwi who simply wrote: "That's my girlllll!"

Her mum Jo also commented on the snap as she told her daughter: "Didn't recognise you!", before adding: "You look incredible."

Liberty is set to go on this years series 14 of Dancing on Ice on ITV as the star paired up with American professional ice-skater Joe Johnson.

The 22-year-old revealed last month (October) that she would be participating in the televised competition this year.

Liberty said on Instagram: "So excited to join the show that I've loved watching for years…"

In another post, the reality star added: "Trying to keep your balance doing all these crazy moves on the ice is kinda harder than it looks but I'm loving every minute of it!"

Liberty snapped herself with ice champions Jayne Torvill and Christopher Dean, along with Pussycat Doll member Kimberly Wyatt in her ice skating training sessions in the run up to the series air.

The Dancing on Ice star has been posting herself practising backward cross overs and more dynamic moves to her Instagram story in prep for the weekly show.

Liberty and dancing partner Joe have also been taking it in turns to practice each others accents with the pair being from opposite sides of the pond.

The show will return to ITV in January 2022.