Amy Shark is eating banana bread and making it clear that she means business.

"I'm a big girl, I've seen some bad shit, I am not going to break," the singer-songwriter says. "Just be real with me if you need to be. I'll have more respect for you and we'll have a way better relationship." 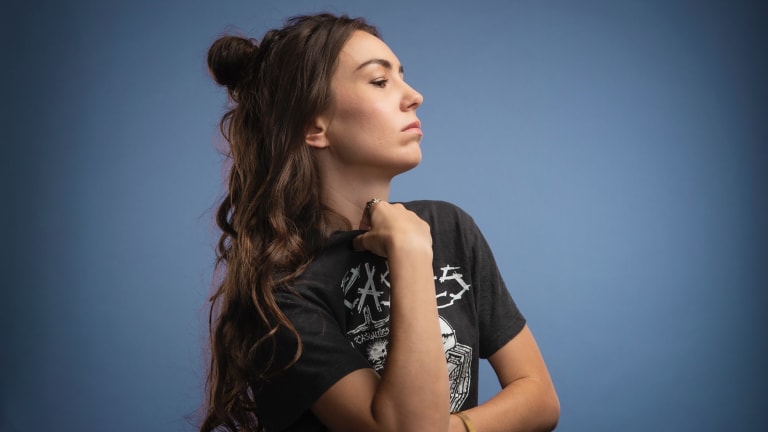 Shark, a Gold Coast-born 32-year-old who was virtually unknown two years ago, is outlining her advice to music industry professionals who now want to deal with her. Her schedule is tight. She's gone straight from the Spectrum photo shoot to our interview at a cafe in the Sydney Harbour suburb of Pyrmont, and looks every inch the chilled, internationally famous indie pop star she has become. She's rocking black – dark adidas Boosts, skinny jeans, a vintage Chicago Bulls jacket and sunglasses she suspects are from a petrol station. "I lose all my sunnies and Shane [Billings, Shark's husband] said I'm not allowed to have expensive ones any more because I leave them in planes, cars, Ubers, I sit on them … I've probably lost about two grands' worth."

What about that one touch of bling, the hefty silver ring? "Versace – no, I got it at a flea market in Berlin," Shark laughs. "One of the Veronicas came up to me at the Commonwealth Games closing ceremony [where Shark and the Veronicas both performed live] and said, 'Amy, is that Versace?' I was like, 'I wish.' 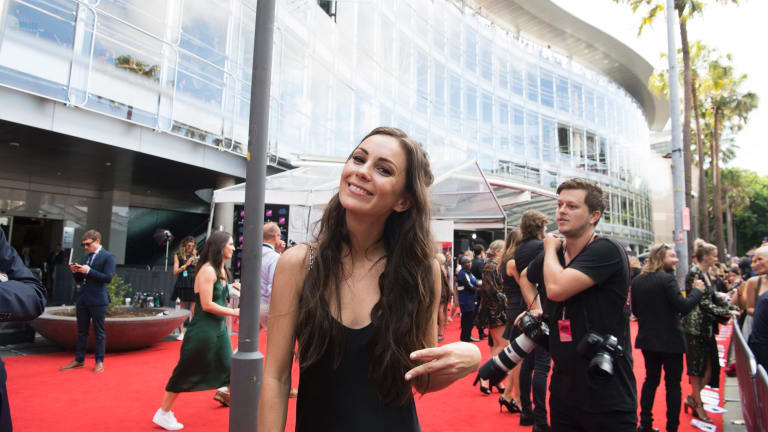 Amy Shark, pictured at the ARIA awards last November, says she has a “serious, serious relationship with music.”

"It's a lion." She closes her fist to display the engraved adornment. "It reminds me to be fierce."

There's so much going on in Shark's world that perhaps she really does need reminding. Shark's life changed with the July 2016 release of her emotionally penetrating breakthrough single Adore. Having scored a regional arts grant, Shark recorded the track with Grammy-winning, LA-based producer M-Phazes, an artist who is also from the Gold Coast.

When Adore hit the airwaves, Shark – unsigned, unrepresented and holding a vast stash of original songs – became the subject of a global record label bidding war. Sony Music Australia won and readied itself to re-release her single.

Shark engaged a management team, Adore went viral (sales have since gone triple platinum) and garnered her a series of music awards. Amid cries that she might be a one-hit wonder – "That's the story of my life," she says, "So many people would come up to me and go, 'It's going to be hard, isn't it, to back up Adore?' I'm like, 'Is it?'." – she shifted focus to America. 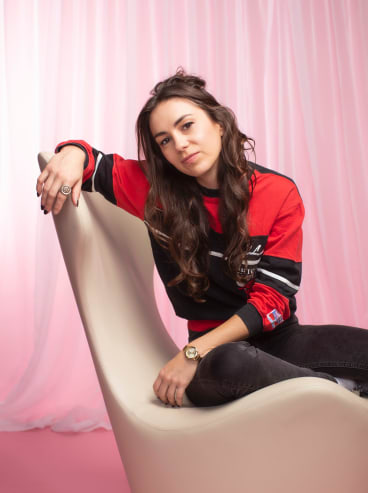 “For the first time I felt really alive and happy, and clean.”

Adore broke into the US Billboard chart, peaking at No. 35 and Shark gave soulful performances on high-profile TV slots such as The Late Late Show with James Corden, and Jimmy Fallon's The Tonight Show. She released her first EP Night Thinker, a beguiling tasting plate of tracks about love, loss, vulnerability and bad behaviour. Between gigs, she completed Love Monster, her debut album with input from Blink-182's Mark Hoppus. The first single released from it, a pointed anthem about persistence titled I Said Hi, went platinum.

On stage, Shark is a dynamic ball of energy. In person she's the same – lively, engaging, employing a ready smile, a love of swearing and the confidence to be both scaldingly frank and deeply evasive. She makes it clear that she and her husband worked hard for her "overnight success", that she controls her own sound and look (even editing her own music videos) and that there is much more to her than some may think. After all, "Amy Shark" has only existed since 2014. 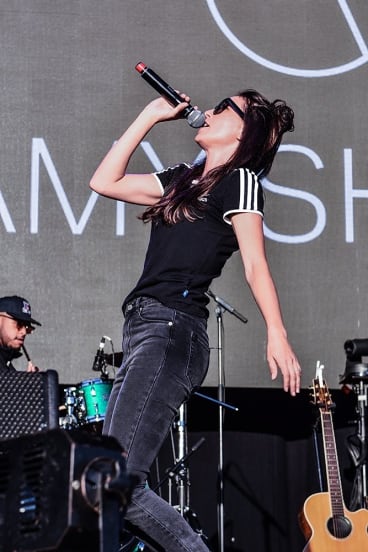 Amy Shark on stage is a dynamic ball of energy

"It is two different worlds that I've lived [in]," the singer says by way of explanation. "But I feel like actually I've lived five different lives."

Life One began with her birth in May 1986. Her parents named her Amy Louise and Shark was "just a baby, one or two" when they split. 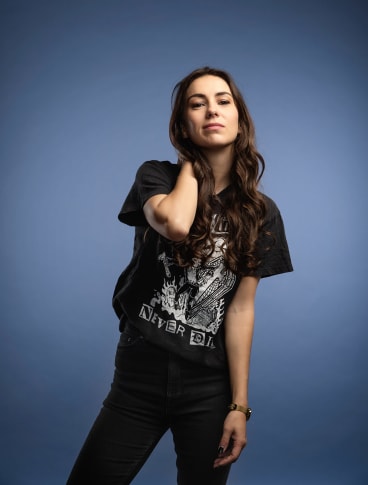 Every inch the chilled indie pop star she has become.

Dark tensions exist between the singer and her biological father, whose surname she used when she first started performing but avoids now ("that's definitely dead and buried"). Shark does not want to elaborate on the specifics publicly but volunteers, "I don't talk to my 'real' dad". Asked if she has had any contact with him, she replies, "only recently, since all this [her success] has happened".

This interaction took place over Twitter, she adds. Shark is supremely confident in this forum, sharing her highs and lows with close to 14,000 followers, and she has no problem coming out punching. Her response to him hangs there in a tweet stating: "Haven't heard from my father in 15 years until now. It must suck knowing ur daughter got all this way on her very own! Now beat it! I'm busy."

She seems doubtful that is the end of the matter, predicting: "It is going to get ugly."

Life Two represents her childhood time with her mother Robyn and stepfather David Cushway, both of whom she still adores. "He's my dad,'' she says of Cushway. "I used to call him Dave and I remember the day I said to Mum, 'Do you think I could call Dave "Dad"?' She cried. She said, 'Why don't you go and ask him?' So I went and asked him, and he cried. I was only young but I remember it really well."

Shark did not cry. "I didn't understand," she says. "I just knew I loved him and I wanted him to be my Dad."

When Amy was six, they had a son, Mitch. "There's six years between Mitch and I, so took a real motherly vibe to him," she says, "He's a dude."

Their grandparents presented Mitch with an electric guitar for one of his birthdays (Shark thinks it was his eighth). Shark saw him playing, thought "if this little loser can do it, I can", and switched her attention from theatre to wanting to play in bands.

Her parents had "cool" musical tastes, she says, listening to the Smashing Pumpkins, Sinead O'Connor, Pearl Jam and Silverchair. She realised that she "loved lyrics a lot" and immersed herself in R&B, Eminem and punk: "Cutting-edge, raw, different stuff. Honest stuff."

At high school she used her parents' video cameras and added soundtracks to her footage ("I was always addicted to putting visuals to music"). One boyfriend was "really bad news". "Drugs," Shark clarifies, "And … [he] hurt me – not physically but cheating and lying and everything bad. Stealing from me."

Shark played guitar in a "crazy, thrash-y, indie" all-girl band but didn't sing much, "I was just too shy." Around the time she left high school she met Shane Billings, a New Zealand-born Gold Coast resident three years her senior. They shared a love of punk and had a mutual 21-year-old friend hit by a diagnosis of Hodgkin's lymphoma. His death five months later "rocked us, it broke us. It was so sad, and it probably pushed Shane and I together." They married on May 11, 2013.

"He's probably the smartest guy I've ever met," she says of Billings, who went straight from school to a double degree in finance and business, then directly into an accounting job.

"He's from a really great family, I think that's what attracted me to him as well. He's got his head on and I had just dated so many losers. He really, really cared about me, and so did his whole family. I've been through shit with my family and it was … so attractive to me. Stability. Not waking up with that pain in your stomach. Is someone lying to me? Am I hurting myself because I'm with this person? Am I doing this the wrong way?

"For the first time I felt really alive and happy, and clean."

Cue Life Three: "Getting home at 5 o'clock and having dinner … having this really nice life."

Shark started a university film and digital video course she never finished, in part because she launched an event filming business. Billings scored a job with the Gold Coast Titans Football club, and Shark "got in there" as a video editor.

Her girl band days were over but Billings convinced Shark her music had to continue.

"He was obsessed from day one," she says. "He loved everything I did and believed in it way more than I did. Way more. He booked me gigs, and wrote to people saying, 'You need to hear Amy' … Even when I didn't know he was doing it, he was working … trying so hard to get me heard."

Life Four was the six-year stretch during which Shark worked days and sang covers at night, anywhere that would have her.

"There were so many bad gigs," she says, recalling bookings at a topless waitress bar where patrons would catcall her to strip. "It was really degrading and horrible. Every night there would be an argument … and I'd have to call security."

Shark honed her musical style, obsessively writing songs and plotting, "in secret and with Shane. We knew what we wanted to do."

She rolled through stage names such as Amy Cushway, Amy Billings and Little Sleepers before trying "Amy Shark", because her favourite movie is Jaws and because her songs can be "brutal".

She had no idea of its power. "It was just another name, I'd already had 50 of them," she says. Shark spent all her energy playing, composing and recording. Year in, year out, she failed to break through or even secure an audience. She came close to quitting.

"I'm from the Gold Coast so everyone's a hermit … no one goes to gigs," she says. "I don't blame my friends at all for that but there were times when I … needed an organic growth of people coming to shows, and they weren't there."

Then came Adore and Life Five. Shark is adjusting: "It's so hard for me to really enjoy it because it's so confusing for me. To have people constantly share stuff now and I'm like, 'You didn't share stuff before. Where were you before?' I've … got to snap out of that because it's quite negative … It's hard when you've had so much shit."

The whirlwind is about to become a tornado with a debut album release and worldwide gigs. Shark's straight-talking husband will travel with her, to keep things "real".

"Shane can be too harsh with me sometimes," she smiles. "It's like, 'Hey, I'm your wife, you love me' … We work on that everyday because this is our business. Music is our business."

But for a woman who has turned re-defining herself into a defiant art form, it is more.

Shark says she has, "a serious, serious relationship with music''.

Amy Shark's album Love Monster is released on July 13. She will play The Forum, Melbourne, on August 30 and 31, and the Enmore Theatre, Sydney, on September 1 and 2.