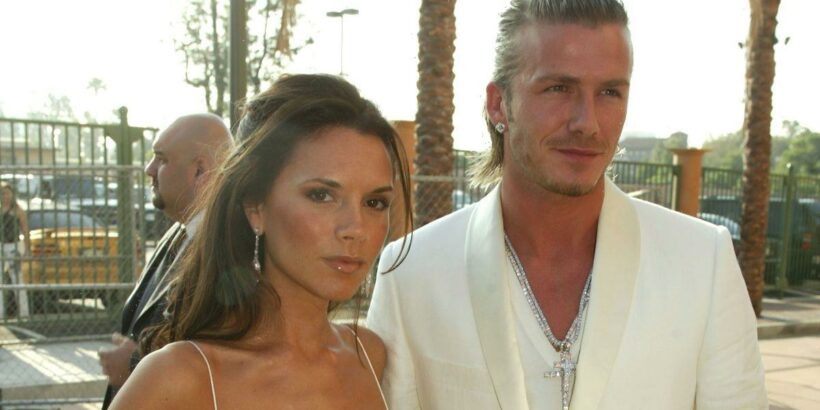 David and Victoria Beckham have been fashion icons and one of the nation's best-loved couples for several decades.

After they started dating in 1997 they soon became known for their sublime fashion sense.

And through the late 90s and early 2000s, the power couple were owning their own styles.

During the noughties, the pair adopted a more formal style, with former England footie star David often wearings suits and Posh was seen in blazers and corsets.

The pair have also always had a penchant for dressing exactly the same.

Daily Star Online has taken a look back at some of the occasions when the pair sported outrageous matching outfits..

In one of their most iconic moments, the pair dressed in matching leather outfits.

In 1999 the couple were seen in in leather jackets and trousers as they visited the Versace Club.

But David is not proud of the their leather-clad look.

He previously told People magazine: "Me and Victoria always laugh about when we went to this Versace show and we had on matching leather outfits and now we're like, 'What were we thinking?'."

The pair caused a stir when they attended the MTV Movie Awards in 2003.

Victoria looked sensational in lace up Dolce and Gabbana dress, while a dapper David wore a white suit with glitzy jewellery.

To finish their identical look, they couple wore half up, half down hairdos.

Looking like dreams in denim, the couple attended Whitney Houston's concert at Wembley Arena in London dressed in near identical glamorous outfits.

The power couple finished their look with jeans that were in an identical shade of blue.

Their hair was almost as iconic as their outfits, with Victoria's styled into a chic pixie crop and David's in a floppy highlighted style.

In this snap, taken after the couple announced their engagement in 1998, Victoria and David matched their look in casual black outfits.

Meanwhile Victoria, who he had his arms wrapped around, was sporting a black leather jacket, and a fluffy scary to keep her warm in the January chill.

Stunning in blazers and jeans

David and Victoria were seen at New Tokyo International Airport on June 18, 2003 in Japan, wearing matching blazers and white t-shirts.

The footballer paired his look with grey jeans and dapper brown shoes, while Victoria wore light-blue jeans and white stilettos.

The then aged 28 England midfielder, had just ended weeks of speculation by agreeing personal terms on a four-year contract from Manchester United to Spanish football giants Real Madrid, worth 24.5m.