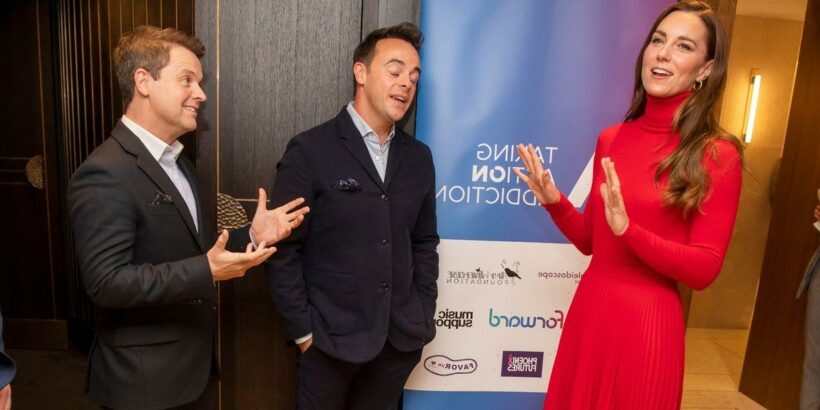 Declan Donnelly stammered when he accidentally called Kate Middleton "Her Majesty" in a gaffe in front of a live audience.

In the funny moment, which made co-host Ant McPartlin burst out laughing, he is introducing Kate at the Taking Action on Addiction event in London.

Standing at the podium in front of the audience, he says: "Shortly we'll be hearing from Her Majesty… erm… Her Royal Highness rather."

Her Majesty is the title reserved only for the Queen, which the stunned TV host remembered a second later.

Trying to save the blunder, he jokes: "I've just promoted you there, rather prematurely!"

"That must happen all the time," quips Ant while the audience laughs.

Dec continues: "It doesn't happen to me. We'll be hearing from Her Royal Highness, rather, very shortly.

"Then we'll watch a very powerful short film that challenges the perception of addictions."

Kate, the Duchess of Cambridge, then gave her speech about the burden of addiction on families.

Later on, Ant had a frank discussion with Kate about his own battle with addiction to prescription painkillers.

Ant was heard telling the Duchess: "By the time I asked for help it was really…it was bad."

"But as soon as you started to open up to people, the problems started to disappear."

In a more lighthearted moment, Kate asked if she could do a Bushtucker trial on I'm a Celebrity Get Me Out Of Here, which Ant and Dec co-host.

The Duchess might have been joking, but she said: "Can I come and do some, like, trial? Bushtucker Trial."

Diversity star Perri Kiely and Louise Minchin are also on the list of rumoured stars.