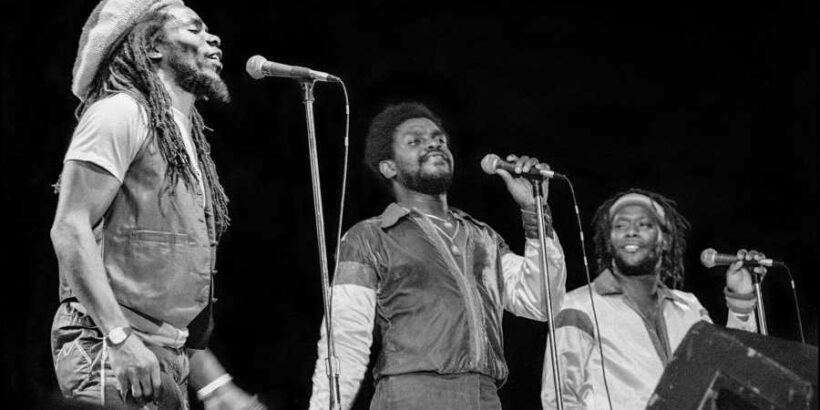 The Diamonds are the longest surviving unit in the history of Jamaican music. Influenced by American soul groups such as the Temptations and the Stylistics, Jamaican pan-Africanist Marcus Garvey, and the island’s indigenous Rastafari movement, Tabby, Bunny, and sole surviving original member Lloyd “Judge Diamond” Ferguson formed the Mighty Diamonds in 1969 in Trench Town, the musically fertile West Kingston community that also birthed the Wailers. Tabby’s cool and committed lead, supported by Bunny and Judge’s majestic harmonies created some of the finest music to emerge from Jamaica’s mid-Seventies roots-reggae golden era. Militant yet mellifluous, spiritual yet searing, some of their biggest hits include the plaintive sufferers’ anthem “I Need a Roof,” and the anti-violence plea that ran through many of their fans’ minds as they sought to comprehend Shaw’s senseless murder, “Why Me Black Brother, Why?”

Simpson had suffered a stroke in October 2015. Unable to continue performing with the group, he was replaced by singer Joseph “Capo Diamond” Beniah. According to a press release from Jamaica’s Ministry of Culture, Bunny had recently recovered from Covid-19 when he was taken to Kingston’s National Chest Hospital for a check up on Friday morning, April 1; he was admitted to the facility and died shortly thereafter. Some have speculated that the news of Tabby’s demise in such a brutal manner, which sent shockwaves throughout Jamaica and the wider reggae community, was too much for Bunny to bear.

The beloved Tabby Diamond was slain in a ride-by shooting (the gunman, reportedly, was riding a bicycle) while standing with a group of friends close to his home on McKinley Crescent in the western-Kingston community of Waterhouse. Owen Beckford, identified by some media sources as Tabby’s brother-in-law, also died in the gunfire while three others were seriously wounded. It’s been widely reported that Tabby’s killing was a reprisal for a murder committed by his son, Jahmarley Shaw, the leader of the McKinley Crescent gang; with the younger Shaw currently incarcerated, Tabby became the target. The vicious attack has stunned those who knew Tabby and his many fans around the world.

“Whoever took Tabby’s life has robbed a music, robbed a culture, robbed a country. They have robbed the world and I hope they will answer to somebody, somewhere for this wicked, evil, cruel deed,” producer Gussie Clarke tells Rolling Stone in a phone interview from his Kingston home. “Tabby was as his vocals sound: calm, collected, easygoing or, as we say in Jamaica, a humble calf and he did not deserve what happened to him,” Clarke produced several albums with the Diamonds including 1980’s Changes, which featured their adored ganja anthem “Pass the Kouchie.” “I am 100 percent sure Bunny was aware of what happened to Tabby and whatever caused Bunny to depart from us, Tabby’s murder would have contributed to it. Now, we have to be on watch for Judge; I am not sure how strong he is at this moment because losing two members of his team has had a serious impact on him.”

As news of Tabby’s murder spread, the group’s former manager Copeland Forbes, in a conversation with Rolling Stone last week in Kingston, wondered, “what kind of a mad world are we living in when such a humble person like Tabby loses his life just sitting at his door and without being in a mix-up with anyone? Why would they shoot a man who represented what ghetto youths could aspire to become?”

“Whoever took Tabby’s life has robbed a music, robbed a culture, robbed a country.” —Gussie Clarke

Forbes, who grew up with Tabby, shares numerous stories about traveling with the Diamonds and other reggae superstars he has managed over the past five decades, including Peter Tosh, in his book Reggae My Life Is, due in May from Jamaica’s Downsound Books. Forbes had intended for the Diamonds to perform as part of his upcoming book tour. He recalls accompanying them to their first show in New York City in 1976 and credits them for helping to move reggae “out of the club circuit and into the concert halls there” with a sold-out show at Manhattan’s Hunter College. He also reminisced on their performance at the Reading Festival in the U.K. where, along with the late U-Roy, they were pelted with eggs and tomatoes as the only reggae acts on a punk-rock bill.

“That was their first trip to the U.K., in 1976, promoting their Right Time album for Virgin Records. They were brave, they never ran from the stage; by about the fourth song the missiles stopped, I don’t know if the audience ran out of tomatoes or just started to like the music,” Forbes laughs. “Tabby had a special voice, he could sing anything, ballads, jazz, and he was one of the nicest people, so I am trying to come to grips with what has happened. May he and Bunny’s souls rest in peace; they are going to be missed, but the Diamonds are forever.”

In 1976 Rolling Stone called Right Time “one of the finest reggae LPs ever released”; the ensuing decades have only strengthened that status. Recorded at Kingston’s Channel One studios, produced by Joseph “Jo Jo” Hoo Kim, and backed by Channel One’s house band the Revolutionaries, an apt name for an exceptional aggregation of innovative musicians, the album’s numerous choice cuts included “Have Mercy,” a gut-wrenching cry for spiritual strength, the Biblically derived “Gnashing of Teeth,” and the stirring title track that references Marcus Garvey’s prophecy of reckoning for Africans.

“When we made the riddim for ‘Right Time,’ the Diamonds weren’t in the studio. I went back to Channel One to hear the vocals and I said, ‘This is wicked.’ That was the first time I got deep into the Diamonds, listened to what they were saying; the song came out and immediately it was a hit,” recalls Sly Dunbar, who with his musical partner, the late Robbie Shakespeare, made up the Revolutionaries’ rhythm section. On the phone from Jamaica on Sunday, Dunbar remembered a show at London’s Lyceum Theater that marked the live debut of the new drumming approach he had created at Channel One, referred to as the Rockers sound, which incorporated a double tap on the snare rim and was played at a slightly increased tempo. “The place was so ram [packed] because this was a new, fresh sound, kind of dub-like, that was just breaking from Channel One with a new group the Mighty Diamonds,” he explains. “What distinguished the Diamonds from the other groups were the great songs written by Judge, Tabby’s soulful, melodic voice, and the harmonies that fit around him. We were playing with a certain rhythmic pattern, a groove just for the Diamonds and the fans just loved it.”

For their second album, Ice on Fire, Virgin paired the Diamonds with legendary New Orleans musician and producer Allen Toussaint, with the intention of expanding their audience. While Ice on Fire showcased the Diamonds’ superb vocals in cover versions of Smokey Robinson’s “Tracks of My Tears” and Toussaint’s “Sneakin’ Sally Through the Alley,” the departure from the mystical roots sound achieved at Channel One didn’t connect with fans. However, the group quickly rebounded with a return to Channel One for late-Seventies efforts Stand Up to Your Judgement and Deeper Roots (Back to the Channel), the latter another exceptional release, reflecting the fractious political climate in Jamaica at the time on such tracks as “Bodyguard,” “Dreadlocks Time,” and the powerful track now heard as a prescient commentary on Tabby’s fate, “One Brother Short.”

The Diamonds’ 1980 hit “Pass the Kouchie,” (kouchie is a chalice used for steaming herb) was recorded 35 years before marijuana was decriminalized on the island. The song was condemned by Jamaica’s then Prime Minister Edward Seaga because it endorsed the illegal use of ganja and was banned from the island’s airwaves. But the prohibition didn’t weaken the song’s popularity, locally or internationally, and it stands as one of the most beloved herb tunes of all time. In 1982, the English group Musical Youth changed “kouchie” to “dutchie,” a slang for a cooking pot, and their ganja-free “Pass the Dutchie” became a Number One hit in the U.K. and a Top Five hit in the US.

Throughout the 1980s the Mighty Diamonds recorded several albums with Gussie Clarke; he also recorded their vocals on his “Rumors” riddim, one of the biggest riddims of the late Eighties, which yielded their hit “Heavy Load,” and positioned the roots-reggae icons within the digital dancehall era. The Diamonds’ willingness to experiment, explains Gussie, put them at an advantage over other acts.

“They were not stuck in a zone, only doing one kind of song, so they evolved over different eras, doing many different things,” he says. Gussie planned to go in the studio with the Diamonds this year to make another album and was considering the title Diamonds Are Forever. “Just the fact that we were coming back together would have had an impact,” Gussie continues. “In early March 2022, we met and signed the contracts; the only thing left to do was start working. They were three different and varied personalities, but together, they were one. So that chemistry, that camaraderie, that friendship, and their willingness to practice and hone their craft, made them true diamonds.”

The timelessness of the Mighty Diamonds’ Seventies and Eighties recordings kept them in demand on the reggae-festival and live-performance circuit; they had reportedly just finalized plans for another international tour. The group has been a longstanding favorite at Jamaica’s Rebel Salute, having performed at the fest, which attracts more than 20,000 fans, several times since it was founded in 1994.

Rebel Salute promoter and veteran reggae artist Tony Rebel says he planned to have the Diamonds on the lineup for the event’s scheduled return, after a two-year absence, on Jan. 13 and 14, 2023. Reflecting on Tabby Diamond’s killing, he condemned the influx of guns into the island. “Most of the guns in Jamaica come from Jamaicans in America sending guns here, and we want them to stop,” he says. “Send money, send things that can help people uplift themselves. The culture of violence is here, but if you don’t have the tool then you won’t have anything to work with.”

While many have questioned Tabby Diamond’s choice to remain in the crime-plagued inner city when he had the means to move to more affluent, safer uptown areas of Kingston, Rebel says that wouldn’t necessarily have changed the tragic outcome. “When most Jamaicans get money, they move uptown, but Tabby stayed in the community where he had lived for over 40 years because he tried to build his community and it helped to motivate others in the inner city by knowing Tabby Diamond lived here,” he says. “Peter Tosh was shot and killed at his uptown home [in 1987] so it doesn’t matter where you are. If they are after you, they will come for you. It is very sad to know that Tabby, who didn’t trouble anyone, died for someone else’s sins. He sang many songs that were prophetic towards his death: ‘When the right time comes, some a go bawl fi murder,’ and they bawled for murder when he died. Tabby was a legend in his own right, and his death is tough to process.”