At the same time, around 50,000 people are marching through the city in protest of POTUS’ UK visit, starting outside the BBC building in Portland Place, via Oxford Circus and finishing in a rally at Trafalgar Square.

The inflatable baby Trump is looming over Parliament Square Garden in Westminster, near the Houses of Parliament. 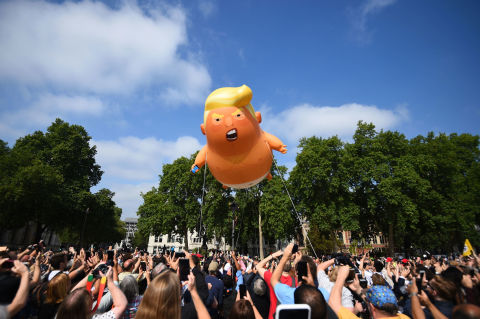 Naturally, organisers of the enraged balloon are hoping The Donald will see it.

The blimp has been approved by the Greater London Authority, so it’s free to fly (relatively) high – though it could be taken down as the Met Police and National Air Traffic Service (NATS) does retain the right to remove it.

Piers accused Sadiq of hypocrisy, claiming that he and the Greater London Authority wouldn’t have allowed an offensive balloon of Hillary Clinton or Barack Obama to be flown over Parliament.

“My point about anybody – whether it’s President Trump or any world leader – is just because they might find it objectionable to be ridiculed, we can’t curtail our right to a protest,” Sadiq said.