So much metal, so little time. While Download has been been running in the UK since 2003, the hard rock festival only made its first Australian appearance in Melbourne last year. The Sydney debut was always going to be a massive day, so arriving late was part of the survival strategy. 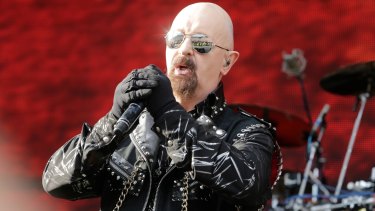 Rob Halford and Judas Priest led the crowd through some old-school metal.Credit:Paul Rovere

Down in the natural hillside amphitheatre, light relief was available in people-watching the many tribes in the broad church of metal, and cover versions of Cher, Dolly Parton and the Beach Boys by pop-punk pranksters Me First and the Gimme Gimmes.

Melbourne's 12 Foot Ninja put on a good show, the anthemic Invincible a highlight of a highly eclectic set. No sooner would a mosh pit open up than reggae beats and proggy noodling would leave punters scratching their heads, wondering how they could possibly slam dance to this.

Hailing from nearby Blacktown, local lads Thy Art is Murder served up brutal extreme deathcore and won the award for biggest circle pit of the day after vocalist CJ McMahon ordered the crowd to run laps around the sound tent.

Back at the main stages, Alice In Chains failed to fire, their metal-flavoured grunge somewhat anaemic compared with the meatier musical dishes on offer elsewhere. Thankfully, the antidote immediately followed in the form of Judas Priest.

Rob Halford was indeed the high priest of metal, the leather-clad, Harley riding 67-year-old leading the faithful through a set of classic old-school tunes. They closed with Breaking the Law, but that was never going to be an option considering the heavy presence of the NSW Police Force and their sniffer dogs.

Headliners Slayer played a set of super-tight and bone-crushing riffs – which made it a tough decision to depart in order to check out the theatrical pop-metal of Ghost.

The charismatic Cardinal Copia led his masked ghouls through an over-the-top performance that could best be described as "The Phantom of the Rock Opera", with the guest appearance by ex-frontman Papa Emeritus in full pope regalia wailing on a saxophone a delightful surprise.

Parramatta Park was an ideal venue – centrally located and easily accessible by train, especially from Sydney's historic heavy metal heartland in the western suburbs. Portaloos, bars and free water were plentiful (although long queues for food trucks were, too).

Also pleasing was the juxtaposition of natural and unearthly worlds – the scent of the surrounding gum trees combined with the appearance of hundreds of bats at sunset to contribute an amiable and uniquely Australian atmosphere to this festival of metal.