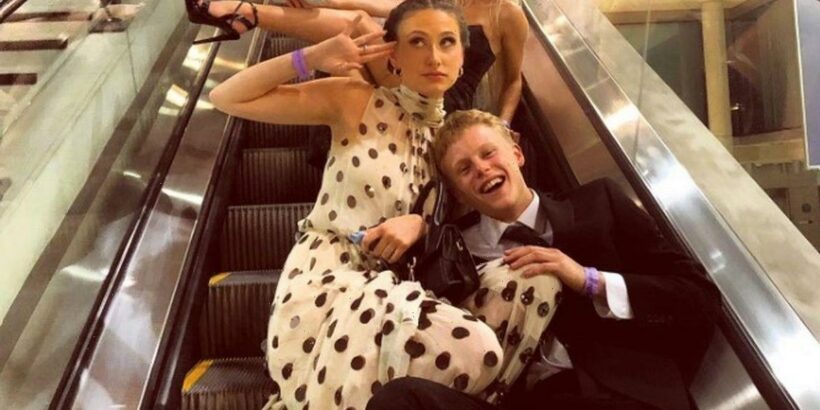 But Milly Zero looked worlds away from her Dotty character in a stunning snap with her EastEnders co-stars at the National Television Awards taken on Thursday (October 13).

The Albert Square residents looked to be in party-mode as they sat down on the escalator and cut playful poses after the show. Milly looked incredible in a slinky white turtleneck dress with black polka dots which sailed all the way down to the floor.

She slicked her lush brunette locks back and accessorised with hooped earrings and a chic black clutch bag.

The glowing Dotty star looked perfectly dolled up for the event with brushes of makeup and a lick of lippy to top it all off.

The actress sat next to beaming Bobby Beale star Clay, who looked like a shoe-in for the next James Bond in a black suit and white shirt.

Young Clay seemed in high spirits as he affectionately leaned in towards Milly and held onto her knee on the arena escalator.

Milly threw her hand up in a playful salute and shot a jovial stare away from the camera.

Behind her sat Danielle, who sizzled in a black dress and threw a cheeky pose by kicking out her leg and poking out her pointed-toe heel.

Above Danielle sat Bernadette star Clair Norris, who looked elegant in a pink fluffy coat and dramatically different from her Walford alter-ego.

Hunky Shiv looked suave as ever as he leaned into shot at the top of the stairs in an open-cut shirt which highlighted his chain.

Milly took to Instagram on Sunday and wrote in the caption: "End of the night vibes…"

One gushing fan dubbed Milly: "Prettiest girl" in the comments, whilst another admitted: "Ahhh I would so love a night out with you guys!"

EastEnders was nominated in the Serial Drama category at the NTAs but lost out to rival soap Emmerdale.