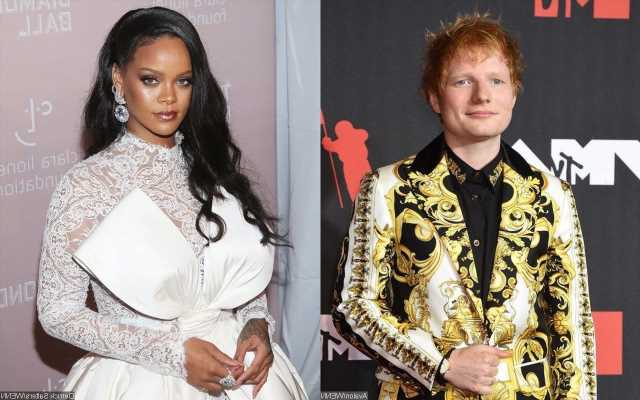 Just hours after The Verve frontman Richard Ashcroft confessed his dream of writing a song for the ‘Work’ singer, the ‘Perfect’ hitmaker opens up about his own aspiration.

AceShowbiz –Ed Sheeran has joined the long list of songwriters who want to pen a hit for Rihanna.

Just hours after The Verve frontman Richard Ashcroft confessed it was a dream of his to have Rihanna record one of his songs, the “Perfect” singer told “The Breakfast Club” he’d like the “Umbrella” hitmaker to sing one of his tunes, too, admitting she has always inspired him.

“Rihanna is always the benchmark…,” Sheeran said. “That’s how ‘Shape of You’ was created, that’s how ‘Love Yourself’ by Justin Bieber was created – because Rihanna, she’s got such great taste in songs…”

“You can’t say what Rihanna’s style is, it’s just good tunes. So when you go into the studio to create a song, always we go, ‘What would Rihanna do?’, so she’d be someone I’d always, always want to work with and write with or for.”

“The fact that she can do ‘Work’ and then she just does ‘FourFiveSeconds’, and they’re both totally different but both f**king incredible tunes…”

And Sheeran, who had one songwriting wish come true when Beyonce Knowles joined him for his “Perfect” revamp, almost realized his dream when he was putting together his “No. 6 Collaborations Project” – he reached out to Rihanna, who seemed interested, but the song he had in mind for her wasn’t the “right tune.”

As for Ashcroft, he previously told Daily Star newspaper’s Wired column about his dream collaboration with Rihanna. “A big thing I want to do is write for other people,” he said. “I want to know who writes for Rihanna and get an introduction.”

“Adele would be great, but there’s big competition there. I like big hits. I write big melodies and big choruses. I like singers where you know the chorus will be heard by billions of people,” he went on explaining. “That’s not for the dough, but the idea that you can get your melody heard by so many people.”