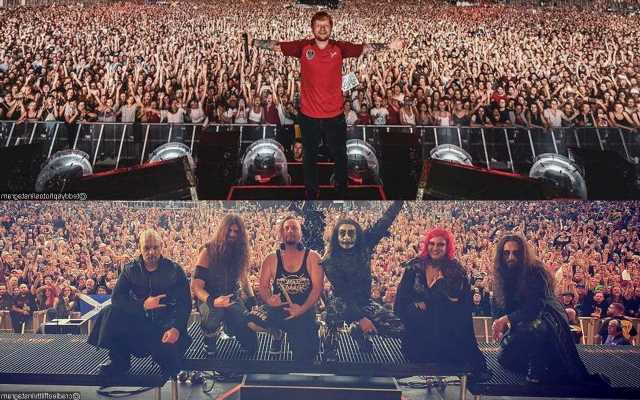 When met backstage at Bloodstock Festival 2021, Dani Filth confirms that the ‘Perfect’ singer has invited him to the latter’s to talk about them working on new music together.

AceShowbiz –Ed Sheeran is planning to write new music for heavy rockers Cradle of Filth. The band’s frontman, Dani Filth, has confirmed he and the “Perfect” singer have been talking about working together, and he can’t wait to see what closet death metal fan Ed has to offer.

“He actually touched base with me. I’ve been invited up to his place. Well, he said he could come down to mine, but I pointed out to him that I don’t own my own bar or village, and it’d be better if I went there. He said he’d do anything. Quite literally. He said he’s a massive fan. He seems like a genuinely very nice guy actually.”

“I think the Ed Sheeran collaboration would be great fun. I think it’d be great if we did it for charity because at least it would bring a bit of credibility to it. Because obviously to his public, it’d be like, ‘Oh my God, he’s got this weird comical guy,’ and to my public, it’d be like, ‘Oh my God, this is a bit weird, isn’t it?’ But I think that sort of thing, nowadays, works.”

Ed himself has previously spilled on his willingness to explore the heavy metal genre. “I was really into death metal as a kid. I listened to Cradle of Filth and Slipknot and all that stuff. I’m not saying I could ever step into that world. I learned all those riffs on guitar as a kid,” he told The Sun. “That’s something I’ve never thought about doing – but something I would not be opposed to creating.”