Lovers of Ed Sheeran might want to stock up on some tissues and put one of his albums on because it looks like the singer is officially a married man.

Ed confirmed his engagement to Cherry Seaborn back in January of this year, but speculation that the couple are actually already married has been positively rife – until now.

And that’s because Ed has pretty much confirmed it in a recent interview with Access.

While chatting to Access about his upcoming film (!), Ed responded to a question about wedding plans with a not-so steely silence, before giving up and pointing to a ring on his finger.

The reporter quickly congratulated Ed on his apparent marriage, who went on to say that he never “really [does] much too public anyway”. Confirmation, see? 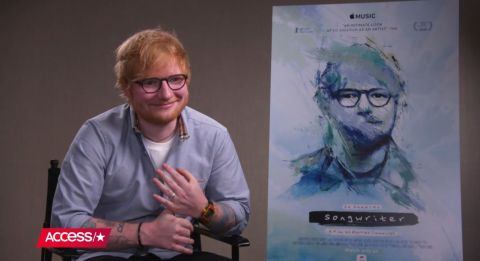 Someone else who’s looking to partner up with Ed – but not in that way – is none other than Katie Price.

Last month, the reality veteran told Loose Women that she would love to collaborate with the singer-songwriter for a brand new acoustic album. ‘A Whole New World’, this ain’t.

“I’m going to bring out another album, purely to make money for the British Lung Foundation, and want to do acoustic versions,” she said, before adding: “Ed, come on!”