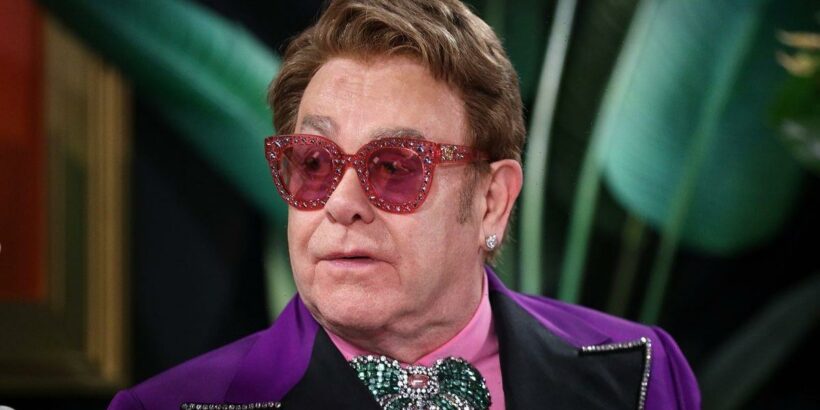 The Rocket Man hitmaker is one of the best-selling artists of all time – having sold over 300 million records and released over 30 albums.

The 74-year-old from Middlesex was knighted by Queen Elizabeth for his services to music in 1998, but he's still at the top of his game as he just dropped his Christmas single with Ed Sheeran – Merry Christmas.

However, as rightly famed for his incredible hits, Elton has also become known for privately helping huge artists when times get tough.

To celebrate Elton's wedding anniversary to his husband David Furnish on 21 December 2014, Daily Star have rounded up some of Elton's surprising acts of kindness.

When Robbie Williams was battling his alcohol addition, Elton was there to help the former Take That frontman in his time of need.

Robbie revealed that Elton forced him to check into rehab when Robbie turned up at his house covered in wine stains.

The singer told the touching tale when he appeared on The Jonathan Ross Show in 2019 – to celebrate being sober for 19 years.

Robbie said: "He really tried to help. In the early days when I was first getting sober, there was a week until I had to go to rehab and I had two vocals to do on my first album, one of them was Angels and one of them was Let Me Entertain You.

"I was going to do these vocals then go to rehab. Elton invited me to his house to listen to the work that I’d done so far.

"That morning I got in a black cab and I had this game that I used to play where I’d stop at every pub I saw and have half a pint.

"I’d had 10 half pints before I’d got to the studio. I ended up under the mixing desk, had a bit of red wine and then I knew I had to get to Elton’s for three o’clock.

Apparently when Elton saw Robbie had wine stains down his shirt, the Rocketman told him that he had to go to rehab right away – and Robbie agreed, saying: "I've got to go to rehab now."

After a while at Elton's door, Elton and David let Robbie stay over at their house in Windsor.

Robbie added: "I wake up but I haven’t opened my eyes and there’s a knock on my shoulder and I look and there’s… Elton and David Furnish and a doctor and a psychiatrist and they are here to take me away".

Sir Elton serenaded Prince Harry and Meghan Markle in a star-studded Lunchtime Reception after the Duke and Duchess of Sussex tied the knot in May 2018.

The singer was invited by Harry himself to sing his hit songs at the reception, which was hosted by Her Majesty The Queen at St George's Hall, Windsor Castle.

Introducing Elton, Harry reportedly ended a short speech with a cheeky joke: "Does anyone here know how to play the piano?" before John sang some of his hit tracks – including Your Song and Tiny Dancer.

A statement from the palace said: "Sir Elton performed for the newly married couple in recognition of the close connection he has with Prince Harry and his family".

Elton has formed a special bond with the Royals over the years, because he was also close friends with Harry's late mum, Princess Diana.

Elton and Diana were often spotted at major events, such as when they chatted backstage at the 1985 Live Aid concert.

John also performed for Diana at a 1997 concert for the Prince's Trust, but they also enjoyed private dinner parties with one another – one night saw the pair hang out with Richard Gere and Sylvester Stallone.

Elton and Diana reportedly fell out at one point – when Diana pulled out of writing the foreword in a book called Rock and Royalty (1997).

They patched things up later on, though, and at her funeral, John played a powerful rendition of his hit Candle in the Wind – which was re-written and re-recorded to remember the late royal in 1997.

The proceeds from the single went towards Diana's charities.

Elton said of the Princess: "Over the years I knew her, she was fabulous company, the best dinner party guest, incredibly indiscreet, a real gossip: you could ask her anything and she'd tell you."

Fans would be forgiven for not knowing that Elton has been good friends with Eminem for almost 20 years.

The pair first met at the 2001 Grammy Awards, where they performed one of Eminem's biggest hits – Stan.

The US rapper has also been criticised for penning homophobic lyrics, but after their unexpected duet they held hands in a powerful statement of unity.

Speaking about Eminem on The Graham Norton Show Elton said: "We became friends. We've been amazing friends ever since. He's an amazing guy. […] I just adore him".

Their bond runs deeper than that, though, because Elton revealed that he's Eminem's Alcohol Anonymous sponsor – as Eminem reportedly suffered from a serious drug addiction.

Eminem said that Elton called him every day during the early days of his recovery – no matter where he was.

The rapper even gifted Elton a rather rude gift, revealing what the X-rated item was on The Graham Norton show.

The Tiny Dancer legend said: "I got this package from Eminem, and it just shows you how homophobic he isn't… We had two diamond encrusted c*** rings on velvet cushions… and I have to say they, have remained unused".

Elton helped Victoria Beckham quit the Spice Girls, and there was a special moment that made her realise it was time to leave the girl group.

Victoria recalled the Elton moment in a letter to herself – a follow-up to the popular letter she penned to her 18-year-old self in Vogue.

"He performed 'Tiny Dancer', as if it were the first time, and you realised this was like oxygen for him.

"It was a life-changing moment — while singing and dancing was fun for you, it wasn’t your passion. That day, you started your quest to uncover your own dreams. It was time to step away from being a Spice Girl"

Posh Spice later discovered her "passion for fashion and beauty" – and it's fair to say she's done rather well.