June Carter and Johnny Cash touchdown in Australia in 1973

Fans are celebrating the memory of Johnny Cash today. The legendary singer died on this day in 2003, just four months after his beloved wife. Their love story went through 12 torturous years when they were both married to other people before they finally married in 1968 – and were then inseparable until the very end. Before they met, though, June and Elvis were very close, spending ending days and nights on tour together. The King and Johnny were both signed to Sun Records and June recalled how the young aspiring star would often talk about Johnny and croon his songs, innocently promising to introduce her to the man who would become her husband one day.

June Carter had been performing from a young age on the country music circuit with her sisters and mother Maybelle. Elvis also started his career touring the theatres, fairs and radio stations of the southern states with his bandmates Scotty Moore and Bill Black.

June later described how it was Elvis who introduced her to Johnny’s music on their first tour together.

She wrote: “He was stooped down on one knee and grasping a guitar trying to tune it to somewhere near the correct pitch to make a correct chord ring. (He would sing) ‘Everybody knows where you go when the sun goes down, Ah-ummm, Ah-ummm’ and he’d strike the guitar again. Plink, plunk: ‘Ah-ummm …’ 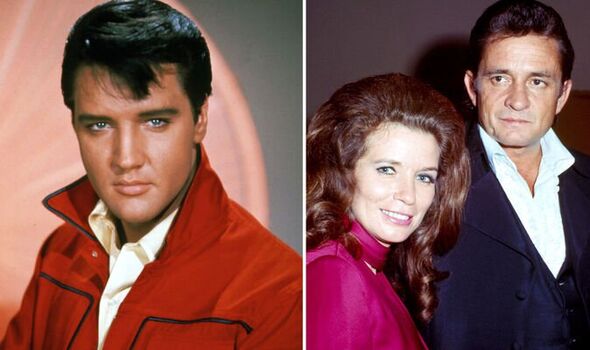 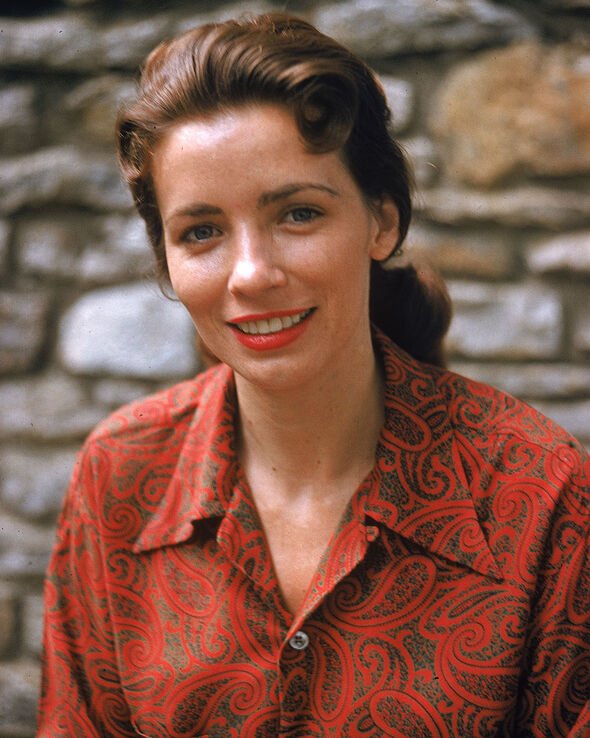 The King was singing one of Johnny’s earliest hits, Cry Cry Cry, as he tuned his guitar.

June described what happend next: “‘Who is Johnny Cash?’ I asked Elvis Presley. ‘What’s the a-um-a-um for?’ ‘That’s what drives the girls crazy,’ Elvis said.

“‘I don’t know this Johnny Cash,’ I said, and Elvis said: ‘Oh you’ll know Cash. The whole world will know Johnny Cash. He’s a friend of mine’.

“So the whole tour, my first with Elvis, we went into small cafes all throughout the south and Elvis played Johnny Cash on the jukebox while I fought off the girls trying to get through Scotty, Bill and I to Elvis.”

June and Johnny finally met backstage at the Grand Ole Opry in Nashville, in June 1956. He was about to go onstage to debut what would become one of his most iconic hits, I Walk The Line. 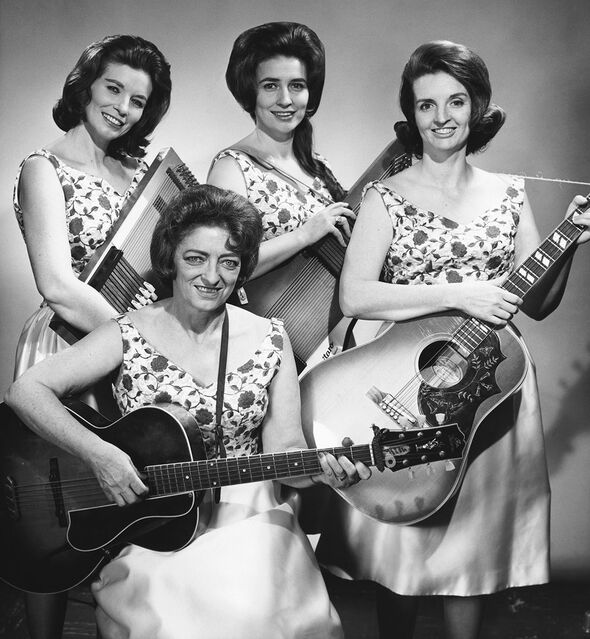 June said: “I found myself backstage trying to tune my guitar humming ‘Ah-ummm Ah-Ummm’, when all of a sudden, there he was! The voice was the same. Johnny Cash took me by the hand and said, ‘I’ve always wanted to meet you’.

“The strangest feeling came over me. I was afraid to look him in the eyes. It was one of the things I did best. I never stammered and still found myself not able to say much of anything. I think I finally blurted out – ‘I feel like I know you already. Elvis plays you on the jukebox all the time and he can’t tune his guitar without humming Cry, Cry, Cry. Now he’s got me doing it.'”

DON’T MISS
Elvis’ terror when girlfriend Anita discovered Priscilla affair ‘He was in tears, pleading with me not to tell’
Elvis death The heartbreaking final thing he did with fiancee Ginger
Elvis’ friends begged Tom Jones to call The King at the end ‘I was the only one he listened to’ 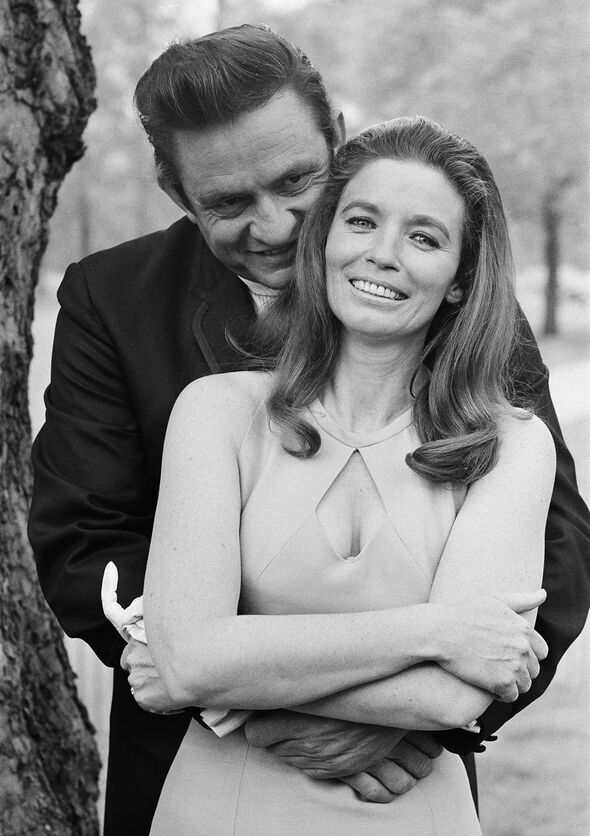 Both described the powerful instant attraction, but both were also married – June to singer Carl Smith and then Edwin Lee Nix, and Johnny to his teenage sweetheart Vivian Liberto.

At the time however, there was more speculation over June’s relationship with Elvis. He was, of course, notoriously linked with women he worked with throughout his career, as well as fans in every city he visited.

In 2008, June’s son John Carter Cash released the biography Anchored In Love: An Intimate Portrait of June Carter Cash with his own insight into the stars’ relationship.

He wrote: “Throughout my life, I would see Mom get a mischievous twinkle in her eye whenever she mentioned Elvis Presley. Her eyes would flash merrily, and she would say, ‘You know, son, your father was always jealous of Elvis.'” 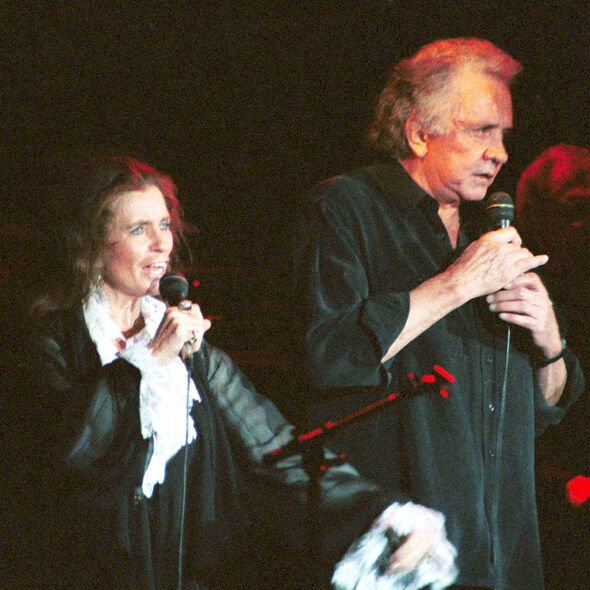 He added: “She even told me once that she sometimes wondered what would have happened if she had fallen in love with Elvis.

“Mom and Elvis occasionally toured together, along with other performers, sometimes including Mother Maybelle and one or more of June’s sisters. The Carter’s were friends of Elvis, and there are stories about Mother Maybelle sewing buttons on Elvis’ shirts when they popped off during his wild onstage gyrations.”

“Though Mom always maintained that she never had an affair with Elvis, Carl (her first husband) believed differently and perhaps for good reason. After Carl moved out of their Madison home, Mom would sometimes let Elvis stay at the house to ‘rest’ after a tour.” 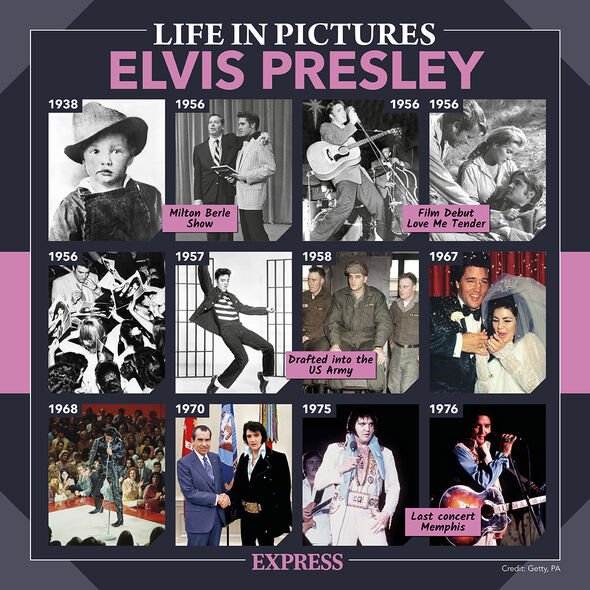 June, of course, was always destined for Johnny but the path to happiness was long and difficult. She divorced Carl in 1956 but quickly married Edwin Nix the following year. She had a daughter with each husband while Johnny had four with Vivian, while he wrestled with drugs and alcohol.

June and Johnny’s infamous chemistry was channelled into a hugely successful professional partnership from the mid-1960s. She wrote his biggest hit, Ring of Fire in 1963.

Both divorced their spouses in 1966 and they were finally married in 1968, remaining together on stage and off until they died. June passed away on May 15, 2003 after heart surgery. Johnny died four months later.