Elvis Presley owned many cars over his life, with a number on display at Graceland. On this week’s Jay Leno’s Garage, the host and Country music star Blake Shelton took a spin in one of The King’s GMC trucks. When Leno told Shelton that he was sitting where Elvis sat, the singer replied: “That’s crazy! Now I’m getting nervous.”

But before the 1967 GMC truck appeared on the hit show, they asked Graceland to authenticate whether the vehicle really was owned by The King.

Now in a new video from the Memphis mansion, Director of Archives Angie Marchese has revealed just how they did it.

A caption read: “Graceland is getting ready to re-open on Thursday, but we’re also helping our friends @jaylenosgarage get ready for their season premiere with @blakeshelton!

“Join us inside our top-secret Graceland Archives facility to hear more about out how we helped Jay’s team verify that an item featured on the episode was indeed owned by #Elvis!” 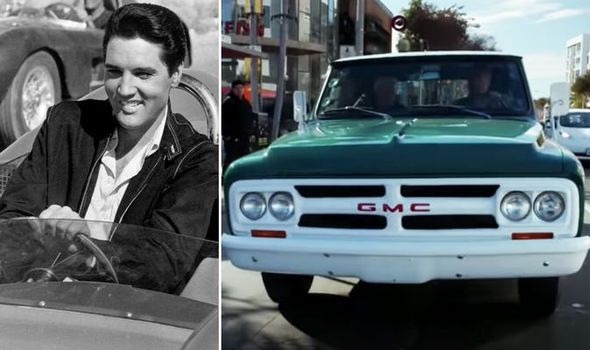 Graceland is getting ready to re-open on Thursday, but we're also helping our friends @jaylenosgarage get ready for their season premiere with @blakeshelton! Join us inside our top-secret Graceland Archives facility to hear more about out how we helped Jay's team verify that an item featured on the episode was indeed owned by #Elvis!

On authenticating Elvis’ possessions, Angie said in the video: “We have so many cheques and receipts for things Elvis bought and gave away throughout the years.

“Most recently, there was a truck that’s going to feature on an episode of Jay Leno’s Garage on CNBC this week.

“And they contacted us to verify if it was actually Elvis’ truck.

“So we did a little digging and not only were we able to find the original cheque.”

“But we were also able to trace through insurance papers, when it was eliminated from the collection, which was May 21, 1969.

“That’s possibly when he sold it and took it off of the insurance.

“So that was one of the three trucks and we have other documents here where the other trucks were sold as well.”

She added: “So it was great as not only was Jay able to feel confident he actually had Elvis’ truck, he actually let Blake Sheldon drive it, so that’s kinda fun.”

During their drive through Hollywood in Elvis’ truck, the pair stopped off at Formosa cafe.

Located opposite a studio where The King would shoot his movies, Elvis would pop across the road here for lunch.

So Leno and Sheldon popped in for an Elvis sandwich aka peanut butter, banana and bacon sandwich.

However, Leno didn’t fancy it and hilariously ordered himself a steak.

But Sheldon dived in and was impressed at just how tasty it was.

In fact, Graceland recently released a video from their kitchens revealing how to make an authentic one.

Elvis famously demonstrated to a maid just how he liked it at home one time.