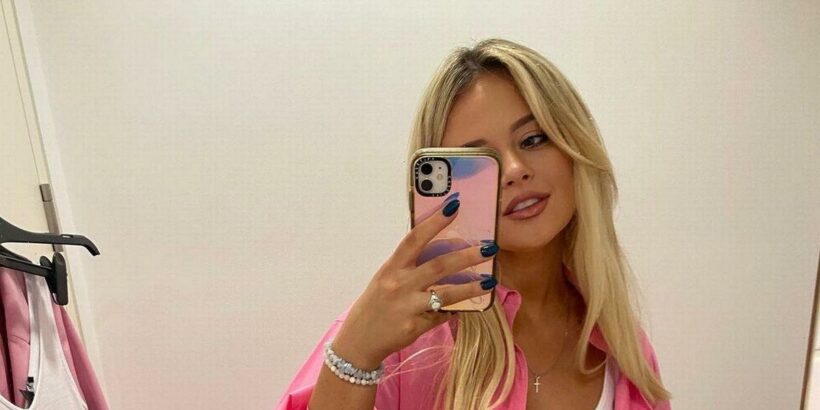 Emily Atack has treated fans to a glamorous selfie as she enjoyed a fun night out at the pub with her stylist.

The former I'm A Celebrity contestant, 32, can be seen pouting for the camera wearing white jeans and a pretty floral low-cut top.

She accessorised with silver rings and had her trademark blonde locks swept up into a messy bun as she showed off her natural beauty with minimal makeup.

She captioned the snap: “Alright darlin’” tagging Hollie, who was also in the photo.

The second snap showed Hailie appearing to be caught off guard laughing, with Emily captioning the snap: “All naat long”

The TV star – best known for her role as Charlotte Hinchcliffe on E4 sitcom the Inbetweeners recently admitted that she ended up receiving a "b******ing" for staying out too late over the weekend.

Emily is understood to have gone out partying on the weekend, with her having since revealed to fans that she ended up in trouble over what time she was out until.

She made the comment alongside photos of herself, in which she was seen lying on a sofa whilst wearing a blue jumper, a green miniskirt and a pair of knee-high boots.

She wrote in the caption: "Made it through Monday with, actually, a completely fair and necessary amount of minor b******ings from staying out too late over the weekend."

The comedian – who is a team caption on Celebrity Juice – then suggested that she had food on her mind, concluding the caption by writing: "Shall we get a take away?"

Emily didn't make it clear to her 1.8 million followers on the platform who she had received the telling off from. Fans however teased her over it in the comments section.

"Oh you been naughty again," wrote one follower. Another said: "You're only young once. Whilst a third commented on the recent post: "Rules are there to be broken."

The photos attracted compliments towards the I'm a Celebrity alum who was referred to by her fans as "beautiful" and "absolutely gorgeous" in the comments section.

Others however teased her over the fact she had her feet up on the sofa – whilst wearing boots. "Get your feet off the couch," read one comment with a winking emoji.