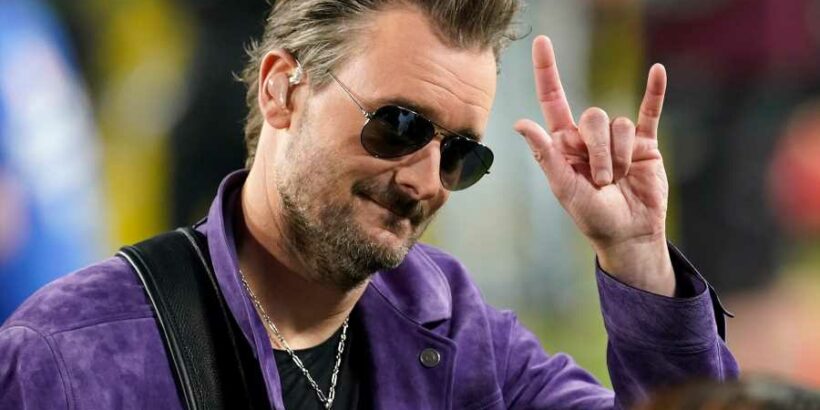 Ed Sheeran has been titling his albums with mathematical signs since his 2011 debut, +, and artists across genres have used question marks, exclamation points, and even parentheses as album titles over the years. Enter Eric Church, who’s taking a page out of the punctuation book for at least part of his new three-record set, Heart & Soul: Along with a disc titled Heart and another titled Soul, there’s a middle component titled &.

But is it pronounced And, as in “Heart and Soul,” or is it Ampersand?

It all depends on which member of Church’s team you ask. The artist himself says it’s And, but counters that his manager John Peets refers to the LP as Ampersand. Church recently told Rolling Stone that the idea to make Heart & Soul a triple release, with each disc its own individual album, came from Peets in the first place.

Eric Church Makes It a Triple With 'Heart & Soul'

“I convinced myself it was a double disc,” Church says. Heart would include melodramatic tracks like “Heart on Fire” and “Heart of the Night,” while Soul leaned toward funkier songs like “Break It Kind of Guy” and “Bad Mother Trucker.” Operating under those parameters, Church had nowhere to slot harder-to-define tracks like “Through My Ray-Bans” and “Lone Wolf.”

That’s when Peets suggested using the ampersand symbol. Church was flabbergasted: “I said, ‘Who are we, Prince? We’re not doing symbols.’”

He was eventually swayed when his manager asked him to consider Heart & Soul visually, in distinct colors. “He said, ‘What if Heart‘s red, Soul‘s blue and Ampersand‘s purple?’ I sat back, and I went, ‘Maybe. That’s interesting.’ I could just kind of see how that would look,” Church says. “But I was never a fan of And.”

& — or whatever you choose to call it — will be released exclusively to members of the Church Choir fan club on April 20th.

Church laughs when he’s asked to imagine a Best Album award announced for & (“And the Album of the Year is…Ampersand!”). He offers instead his personal idea of validation for the project: to potentially have multiple award nominations in the same category.

“Nothing would be better for me, win or lose, if two of these albums ended up in the Album category. If you had Heart and then Soul,” he says. “That’d be awesome.”

Church’s Heart is out now; Soul will be released April 23rd.