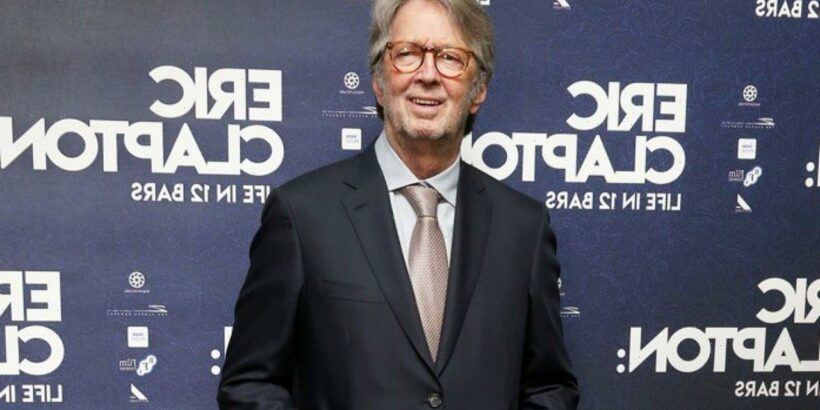 The music legend catches the highly-contagious virus shortly after his second concert at the Royal Albert Hall which makes him to postpone his shows in Zurich on 17th May and Milan on 18th May.

AceShowbiz –Eric Clapton has tested positive for coronavirus. The 77-year-old music legend, who has previously told how he has lost friends and music pals due to his anti-lockdown stance, has postponed a number of his European concerts after testing positive for COVID, but it is hoped he will be “sufficiently recovered” by the end of the week.

A post on his Facebook page read, “Postponement of shows in Zurich and Milan.” The statement continued, “Eric Clapton is unfortunately suffering from Covid having tested positive shortly after the second concert at the Royal Albert Hall.”

“He has been told by his medical advisors that if he were to resume traveling and performing too soon, it could substantially delay his full recovery,” added the post. “Eric is also anxious to avoid passing on any infection to any of his band, crew, Promoters, their staff and of course the fans.”

“So, after intensive internal discussion, it has been decided with great regret and apologies to all those concerned to postpone the performances in Zurich on 17th May and Milan on 18th May,” it continued. “The present hope being to be able to resume the tour starting with the concerts in Bologna on 20th and 21st May.”

“It is very frustrating that having avoided Covid throughout lockdown and throughout the period when travel restrictions have been in place Eric should have succumbed to Covid at this point in time, but we very much hope he will be sufficiently recovered by the end of the week to be able to perform the remainder of the planned performances,” said the message.

The Facebook post stated that “further announcement will be made concerning the rescheduling of the postponed shows once suitable dates can be identified.” It concluded, “The shows are due to be rescheduled within the next 6 months and tickets purchased will remain valid for the new rescheduled date.”

The “Tears in Heaven” hitmaker, who has been doubled jabbed, performed at London’s Royal Albert Hall on May 7th and 8th. Both shows were originally due to be played in May 2021, but had to be rescheduled due to COVID.

Eric had previously pledged not to perform at shows where proof of immunization against coronavirus is required to attend, despite being vaccinated. And his controversial views on the pandemic and teaming up with Van Morrison on the anti-lockdown protest song, “Stand and Deliver’, has led to some of the star’s friends and peers snubbing him.”

In November, Eric, who is father to daughters Ruth, 37, Julie, 20, Ella, 19, and 17-year-old Sophie, said, “My family and friends think I am a crackpot anyway.” He continued, “Over the last year, there’s been a lot of disappearing a lot of dust around, with people moving away quite quickly.”

“It has, for me, refined the kind of friendship I have,” Eric went on saying. The musician added, “And it’s dwindled down to the people that I obviously really need and love.”

“Inside my family, that became quite pivotal … I’ve got teenage girls, and an older girl who’s in he thirties and they’ve all had to kind of give me leeway because I haven’t been able to convince any of them,” he noted. “I would try to reach out to fellow musicians and sometimes I just don’t hear from them. My phone doesn’t ring very often. I don’t get that many texts and emails anymore.”

Eric previously admitted his and Van’s anthem gave him a place to voice his “contempt and scorn.” He wrote at the time, “I continue to tread the path of passive rebellion and try to tow the line in order to be able to actively love my family, but it’s hard to bite my tongue with what I now know.”

“Then I was directed to Van [Morrison]; that’s when I found my voice, and even though I was singing his words, they echoed in my heart,” he gushed. “I recorded ‘Stand and Deliver’ in 2020, and was immediately regaled with contempt and scorn.”