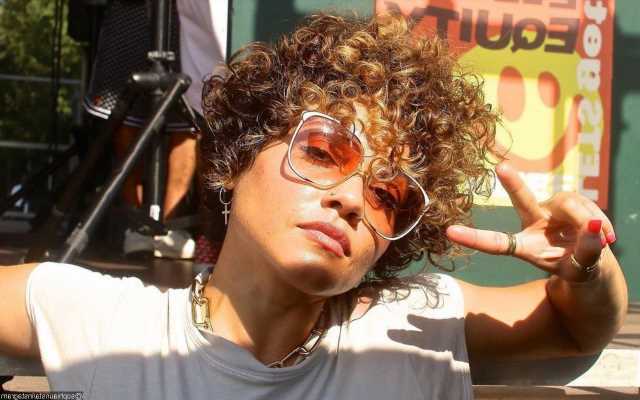 During a set at Welcome to Rockville last week, the singer did an unexpected action mid-performance as she pulled down her pants on stage and peed on a willing fan.

AceShowbiz –Brass Against‘s lead singer Sophia Urista has faced the aftermath of her obscene stage antics while performing at festival in Daytona Beach last week. After he peed on a fan’s face, someone apparently filed a police report against her.

It is noted that it is illegal in Florida for a person to “expose his or her sexual organs in public or on the private premises of another… in a vulgar or indecent manner.” It is less likely for the band, which is known for brass versions of rock songs, be charged for the incident. However, the maximum punishment for an indecent exposure charge is a year behind bars or a $1,000 fine.

The bizarre act took place during a set at Welcome to Rockville on Thursday night, November 11. At the time, singer Sophia Urista allegedly grabbed a bottle of water, noting that she would conclude the show by relieving herself on someone in the audience once she drank it all. “Get my man with the can on his head ready, ’cause we’re going to bring him onstage and I’ma piss in this motherf***er’s mouth,” she said.

The said man willingly climbed onto the stage with an apparently empty can attached to his forehead. As he laid down flat on his back on stage, Sophie straddled his head and slided her pants down. She then peed, trying to aim into the can.

The man then scooped some of the liquid on stage into his hands and threw it out over the audience. Sophia, meanwhile, called for security to get the man off the stage. “Security, get him the f**k out of here!” she said. “Get the f**k out of here, you’re done!”

Addressing the obscene stunt, the official Twitter account for the band wrote on Friday, “We had a great time last night at Welcome to Rockville. Sophia got carried away.” It further explained, “That’s not something the rest of us expected, and it’s not something you’ll see again at our shows. Thanks for bringing it last night, Daytona.”