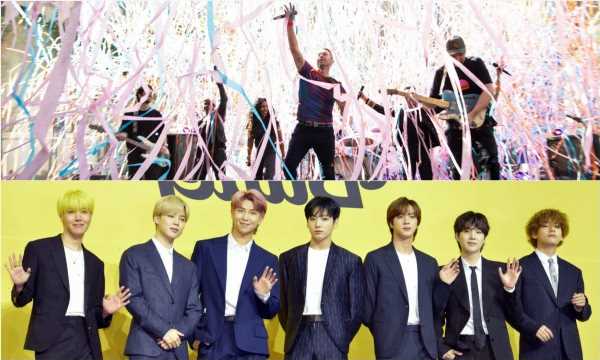 Coldplay teased the lyrics of their single with BTS

On Sept. 23, Coldplay tweeted out an image with multicolored writing on it. It turns out the writing on the graphic is the lyrics of “My Universe.”

Some of the lyrics included on the graphic are:

The image Coldplay tweeted also shows five different sets of the song’s Korean lyrics. Some of those lyrics are intermixed with the English phrases, “Never ending forever baby,” “When I’m without you I’m crazy,” and “We are made of each other baby.”

Coldplay and BTS both wrote the song

Coldplay originally announced Jin, Suga, J-Hope, RM, Jimin, V, and Jungkook of BTS were collaborating on “My Universe” on Sept. 13. The band published more information about the single on their official website. The announcement on Coldplay’s website reveals that both Coldplay and BTS participated in writing the song, and “My Universe” features lyrics in Korean and English.

“The band have today announced their much-anticipated collaboration with BTS. My Universe will be released on September 24th.

The track, sung in both English and Korean, was written by Coldplay and BTS and produced by Max Martin. It is available to pre-order / pre-save now, with a CD single also available to order, at myuniverse.coldplay.com.

My Universe is the second single to be taken from the band’s forthcoming album Music Of The Spheres (out October 15th).”

‘My Universe’ will have a music video and documentary

According to the tweet, a lyric video for the song will also be released at midnight EDT on Sept. 24. On Sept. 26 at 8 a.m. EDT, a documentary called Inside My Universe Documentary will premiere.

The song will also have two remixes, “Supernova 7 Mix” and “Acoustic Version.” Both remixes will drop at 7 p.m. EDT on Sept. 26.

While a lyric video will accompany the initial release of “My Universe,” Parlophone Records’ tweet reveals an official music video will arrive at an undiscolosed date.