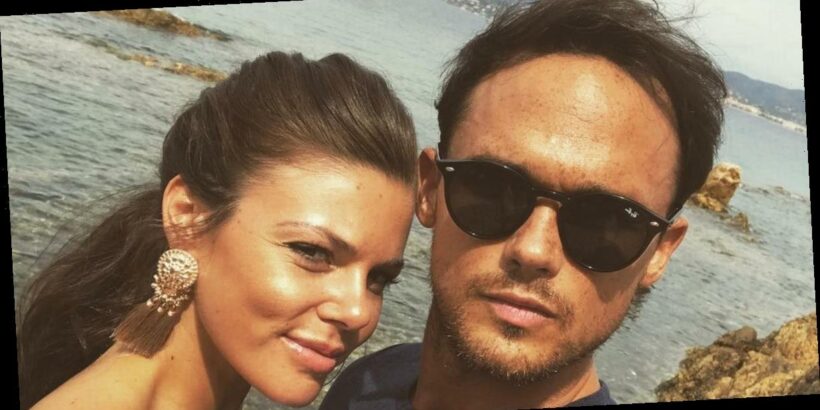 Coronation Street beauty Faye Brookes' romance with Gareth Gates didn't start off in the conventional sense as he was still married when they first met.

At the time of their first encounter, they were both starring in Legally Blonde The Musical with Faye playing leading lady Elle Woods while Gareth starred as her boyfriend Warner.

Gareth's ex-wife Suzanne, who he started dating in 2002 and whom he shares daughter Missy with, was said to have been fuming when rumours emerged that Gareth and Faye were having an affair.

Suzanne is said to have "hit the roof" on one occasion after seeing pictures of her husband going to Faye's flat in Wimbledon.

Shortly after affair rumours rocked the showbiz world, just weeks later in October 2012 Gareth announced that the pair's marriage had come to an end after four years.

In his statement at the time he did not mention any third party being involved and said he and Suzanne had "grown apart".

The singer wrote: "Despite our ­efforts over the past three years­ to make our marriage work, sadly Suzanne and I have decided to separate.

"Whilst we have grown apart, we love and cherish our wonderful daughter Missy and ­together we will prioritise her happy ­upbringing."

For 10 months Faye and Gareth were not spotted together until they made their first public appearance together as a couple nearly a year after his split from Suzanne.

Faye has since revealed it was a "real fairy tale" and says Gareth wrote songs for her when they first met as a way to woo her.

Speaking to Manchester Evening News back in October 2015 she said his songs for her were "beautiful".

The star even said their relationship was "like no other".

She said: "Because sometimes when people know how good something is, all they want to do is pull it apart and that can be hard to take.

"I know that is not what someone’s intention is, and when you see something good it has got to come with some bad things along the way.

"I am in it with him for the journey, and he is in it with me. And I think it is really nice that he wants me to blossom."

Three years later, things sadly starting turning sour as they split up for the first time in September 2018.

Gareth once again was the one to make the announcement as he said they were "choosing to take some time apart" while remaining "best friends".

They got back together just months later and took their relationship to the next level – engagement.

In January 2019, months after their first break-up, Gareth proposed by performing a 17-minute song on a grand piano.

He then placed a £30,000 ring on her wedding finger as she accepted the proposal.

Sadly, the pair never did make it down the aisle as they split again in the August of that year.

A source close to the couple told Manchester Evening News: "Faye and Gareth are both extremely sad about their relationship ending.

"They still care very much about each other and want to remain friends, but the wedding has been called off."

According to reports, the relationship turned "toxic" as they became embroiled in heated rows.

Reports and claims from sources emerged at the time which claimed Faye was "jealous" and felt like she was "sharing Gareth with other women".

A source told The Sun at the time: "It was hard for Faye having to share Gareth with another woman.

"She always felt she was bottom of his list of priorities, behind work.

"Gareth travels a lot for work, and when Faye was on Corrie, they’d have hardly any time together, yet he’d be on the phone to his ex."

There was also reports and claims that Gareth was jealous of his wife's busy career.

A friend of the couple told claimed to The Mirror: "He was always jealous of Faye's success – we all know that she was branching out on her own and he was feeling a bit left out.

"He's a very jealous person and likes to be the top dog whereas Faye is devastated as she gave up so much for him."

During the year they were scheduled to get married, Faye had left her role on Coronation Street to focus on organising their wedding.

Other rumours also emerged that Faye had a "steamy fling" with her soap co-star Sam Robertson, it is claimed.

Gareth and Faye split for the final time in August 2019 after seven years of being in an on/off relationship.

Sources claimed Gareth took a trip away to Ibiza with his sister to take his mind of his heartbreak from claims Faye had had an affair.

At the time, The Sun claimed a source told them Faye had a secret fling with co-star Sam during her break from Gareth.

An insider reportedly told the publication at the time: "It was the talk of the Coronation Street set when Faye and Sam hooked up.

"Her cast mates were under the impression the break from Gareth was simply to do with feeling overwhelmed by the pressure to make wedding plans.

"While they’d been a couple for a long time, after getting engaged Faye realised their relationship was moving to the next level — and she wasn’t 100% sure that was what she wanted.

"Sam was a good friend and a shoulder to cry on. Before they realised it, one thing had led to another."

The source continued: "But Faye was keen to make things work with Gareth and put a halt to things with Sam going any further.

"She wanted to be honest with Gareth and confessed what had happened while they were apart.

"He thought he could get over it but, in the end, it was simply too much."

Two years following their split and Faye is now dating personal trainer Joe Davies, while Gareth is in a relationship with DJ Chloe McLennan.